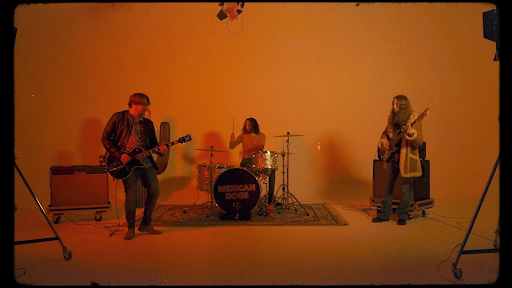 The retro-tinted video arrives as the trio announce their signing to Fretsore Records for what will be their debut album, just a year after signing a deal for their self-titled debut EP (out now).

“We’re honoured and thrilled to have signed our first album deal with Fretsore Records. We’re so pumped to have our music played on the likes of Radio X, BBC 6 Music, Planet Rock and Absolute Radio that this next step felt like a no brainer. We’re playing the new tracks on the road so can’t wait to get them out into the world. Looking forward to working with Ian Sephton and the team on our first big album rollout..”

With recent release “When It’s Gone” serving as a thunderous testament to a band who are going places fast, the accompanying new video is a nod to the cavorting canon of ’70s glam-rock influences that brought the track to life.

Directed by Liverpool-based Dan Hewitson, who has previously worked for clients including BBC Match of the Day, Adidas, Liverpool Sound City and Record Store Day and directed music videos for the likes of Jamie Webster, Red Rum Club, SPINN, and Trudy & The Romance, the video sees the band deliver a playful live performance of the rugged and raucous track.

Evoking the allure of rock’n’roll of yesteryear, the new cinematic accompaniment to “When It’s Gone” is all sepia tones and fuzzy static shots — with a healthy dose of leopard print shirts, glitter-clad drums, fur-trimmed coats and long hair hammering to rip-roaring riffs.

Mexican Dogs self-titled EP is out now, with physical copies on CD and vinyl available as a fan-first exclusive via Bandcamp.