Going To Plan For Korpiklaani 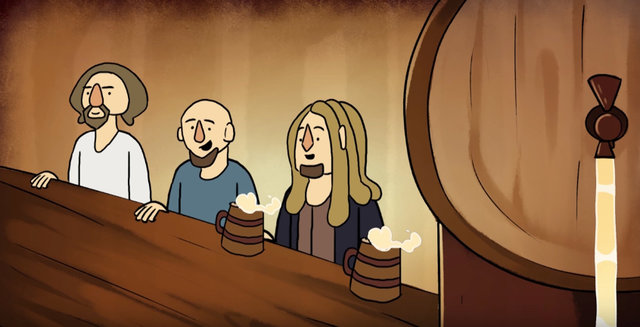 Finnish Folk Favourites KORPIKLAANI  are underway on their tour with MOONSORROW with the package arriving on UK shores on April 20th. In celebration of hitting the road, the band have launched an official video for the track, ‘A Man With A Plan’.

After releasing videos for the tracks ‘Ämmänhauta’ and ‘Lempo’, which wind tales of witches and folklore, KORPIKLAANI now present a parody of themselves and their life on the road. ‘A Man With A Plan’ unfolds the tale of drummer Matson’s ability to sleep while standing up after drinking all night – told via a visually stunning animation.

Guitarist Cane explains: “This song is about our life on the road, the fun side for what we are known for. The lyrics are again also about Matson’s planning ahead for his ‘good’ nights.”‎
‎
The RMIT University in Australia approached the band with a request to create the video as part of their studies, which the band were happy to help with and be a part of. The team spent 13 weeks working on the project with producers Aaron McLoughlin and Simon Norton, resulting in a charming and hilarious fully animated video!

Speaking about the band’s tour dates with their road companions MOONSORROW, Vocalist Jonne Järvelä stated: “I am so looking forward to our fellow FFMM brothers, who for us are the most respected band in this genre of ours. This is a perfect combination of Finnish music and culture.” Fiddle player Tuomas adds: “Exactly, MOONSORROW bring the serious side of our culture and we bring in the balance by adding the festivity of midsummer nights.”

Previous article
Napoleon To Depart
Next article
Discharge Themselves