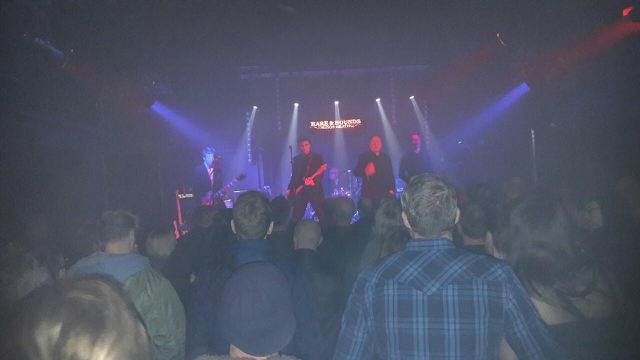 The Hip Priests look like a cool gang in cut-off denim jackets emblazoned with an array of rock and roll emblems with quiffs to match. The singer has huge black circles painted around his eyes.

Like an updated version of Crime they kick into a high energy rock’n’roll show and stick with it all the way through the set, even tighter than when I saw them last.

They have some great song titles, ‘Jesus Died So We Could Ride’ and ‘Zero F***s Given’. ‘Sha Na Na Na Nihilist’ is a great tune, someone shouts ‘rock and roll’ and they happily oblige. They dedicate ‘I Love to F***’ to local band the Black Bombers who just so happen to have a member of the Godfathers amongst their ranks, nice touch.

The Godfathers set blends their old and new material brilliantly. Opener ‘Cause I Said So’ leads into ‘Defibrillator’ from the new album ‘A Big Bad Beautiful Noise’ released on the day of the gig.  Coyne encouraging us all to get involved and single ‘Till My Heart Stops Beating’ is a classic which pounds along with duelling guitars.

This is an amazing set packed with classic old stuff and great new songs, stand out tracks for me were, ‘You Don’t Love Me’, ‘Walking Talking Johnny Cash Blues’, ‘Some Reaction’, ‘A Big Band Beautiful Noise’, and set closer ‘I Want Everything’.

The encores ‘Let’s Get Higher’ from the new album, ‘This Damn Nation’ and the classic ‘Birth School Worth Death’ are a fitting end to a great set. Encouraged by Marou they treat us to ‘Lonely Man’  and ‘Poor Boys Son’ which were now part of their plans.

This was a great show and I hope to catch them at Rebellion in August.

Previous article
Luka At This
Next article
Wintersun Ready To Build