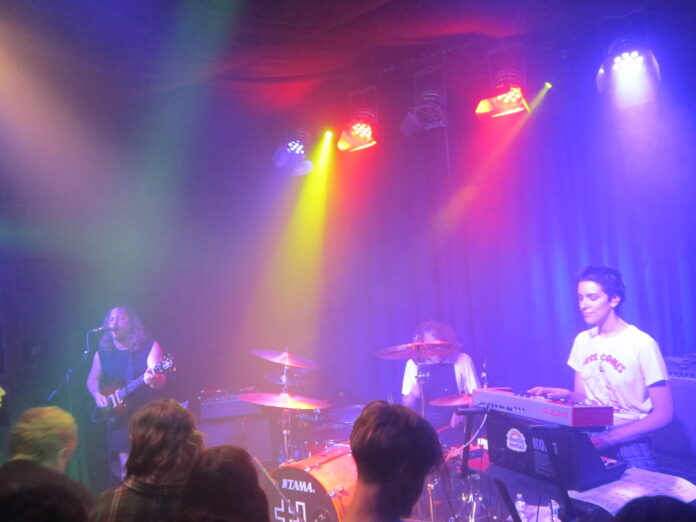 It was with some trepidation that I entered the Hare and Hounds as this is only my second gig since the pandemic but having been fully vaccinated it was time to try and regain some semblance of normality in life. So, what better band could I go see than the Black Country`s God Damn on what is not quite a hometown show but a show in what`s become their adopted hometown. The place is rammed and there`s a tangible feeling of anticipation as we await the arrival of these local heroes.

There`s no fuss just a repetitive buzzing chord emitting from the synth of the latest member of the band Hannah Al Shemmeri as the other two members, frontman Thomas Edwards and drummer Ash Weaver join in. The first two numbers `Vultures` and `Shoeprints in the Dust` from 2015`s `Vultures` album light the touch paper that ignites this sell out heaving mass. Thom takes a brief breather to share the woes of buying a Vauxhall van which blew up on route to a recent gig and was found not to have it`s original engine but a replacement. No millionaire rock stars here.

The temperature rises as the blistering `Ghost` from the `Everything Ever` album gets an airing. The band have a new album out next month called `’Raw Coward’, so we have a preview of a couple of tracks with ‘Shit Guitar’ and ‘Yout’. Thom conveys that `Shit Guitar` has been going down a storm on this tour and it`s about paedophiles who worked at the BBC almost unchallenged. It`s a wonderfully intense sludge come doom laden noise fest which leads in quietly before unleashing hell. Understandably the lyrics are a little uncomfortable to listen to with “there’s no such thing as rock and roll. There’s no such thing as god. So, climb down from your crucifix and play it like guitar. Your idols are all paedophiles who sold you who you are”. `Yout` is a real punkish screamer and the band have shared that it relates to “that false pride that’s groomed into us from a young age. Blinkered to the real atrocities and corruption that have both made our country and continues to do so, that sense of higher moral rank, that sense of superiority and privilege that many still unfortunately feel they’re entitled to. If we’re going to evolve, we need to see what we’ve done and are doing wrong. The death of false pride, finding your true identity and personal growth.” This song seems to spark a number of crowd surfers and seems to be the catalyst to a mosh pit forming.

Thom dedicates the quite eclectic `Satellite Prongs` to former band member James Brown which is then quickly followed by the quite hypnotic `Heavy Money`. Thom introduces the other members of the band before thanking all the fans who have loyally followed them and everybody who made the effort tonight before launching into the final number `Skeletons`

The band depart and we`re left there hot, sweaty, and knackered reflecting on the bruising and scorching hour of stoner sludge metal mayhem we`ve just witnessed. How do you sum up a band like God Damn? Well, I read somewhere that someone had said they`re like “Sabbath having a screaming row with Nirvana” and I think that`s a pretty fair reflection. To me, the band continue to address the challenging issues that they feel we should tackle not by preaching but through the force of their lyrics and music. As I left the venue all three members were chatting, hugging fans, and having selfies so they still retain that touch of approachability.

It`s been nearly five years since I last saw the band supporting stoner rock gods Red Fang and with this new album out next month, let`s hope I get to see them promote this missive real soon.