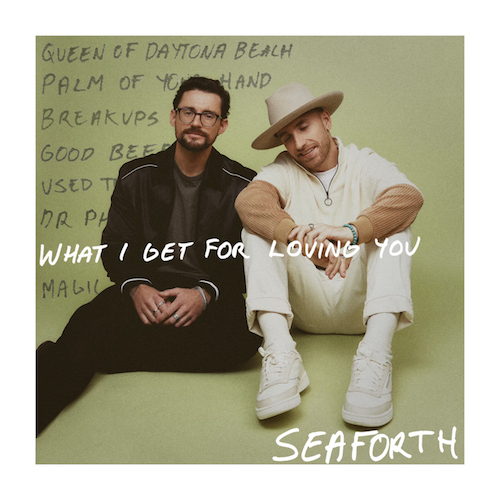 Arista Nashville duo Seaforth has announced their new EP, What I Get For Loving You, which will be released while the duo are on tour in the UK, on Friday, August 26th. Fans can pre-save/pre-add/pre-order the project HERE. The title track, penned by the duo’s Mitch Thompson and Tom Jordan alongside Rocky Block, is available on all streaming platforms and digital retailers now (5/8).

Having amassed more than 340 million global on-demand streams, The duo has been earning rave reviews on their headlining US GOOD BEER TOUR with Music Mayhem declaring, “from the moment Seaforth took the stage, their future as one of country music’s brightest duos was undeniable.” They have also appeared at high-profile US festivals including Watershed, Faster Horses, CMA Fest, and more. Next up, they’ll join Chris Young for his UK Tour later this month (full dates below) and will also be performing on the main stage at The Long Road Festival in Leicestershire.

What I Get For Loving You track listing:

2. Palm of Your Hand