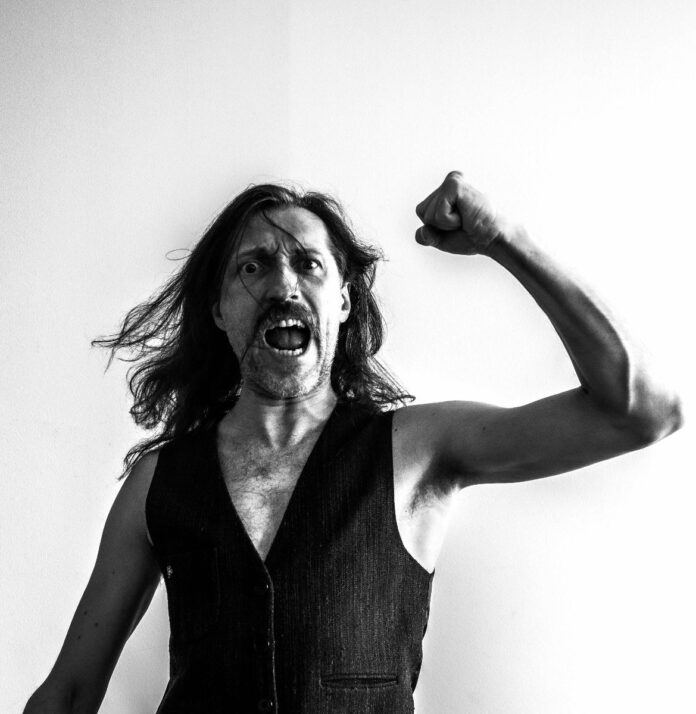 “‘Teroborona‘ is a term for Civil Defense Units formed of civilians who stood up to protect Ukraine,” explains Eugene Hütz, the fiery and intensely charismatic frontman of self-proclaimed gypsy punk rock band GOGOL BORDELLO about the English translation of the title of their new song whose video is released today, 8th June, 2022viaCooking Vinyl.  A provocative and humanizing video, “Teroborona” puts a very real face on the Ukrainian militia who are currently fighting against Russian invaders to their homeland. The song can be streamed/purchased here: https://GB.lnk.to/teroborona.

With scenes depicting fresh-faced civilians picking up arms and performing drills to prepare for battle, the video is an incendiary statement about Ukrainian patriotism and its widespread embrace. “Many of my artist and musician friends had to pick up arms and join Teroborona,” he continues. “This is a dedication to their courage and to the courage of all defenders. The song is rooted in Ukrainian traditional dance ‘Arkan,’ one of true Ukrainian Hutzul spirit.”

Interspliced with scenes of Gogol Bordello and featured guests The Cossacks performing the song, “Teroborona” not only offers moral support but practical support as well.  All proceeds from the sale of the track will go toward the band’s Cauze campaign (https://cauze.app.link/tDUGnELegob), a modern Donor-Advised Fund that donates to Care.org‘s Ukrainian Crisis Response.

The band recently announced they will be returning to London for the first time since 2017. They will be performing a special, intimate show at London’s Electric Brixton on Saturday, July 16th. As the final show of the band’s European tour, £5 of each ticket purchased will be donated by the band to Care.org’s Ukrainian Crisis
Response. An option for additional donations will be available as well.

Currently on tour in Europe, Gogol Bordello and especially Hütz have been on the forefront to bring more attention on the invasion of Ukraine. Bearing witness as his homeland endured the heinous barrage of a violent and deadly invasion from Russia, Eugene recently joined forces with Les Claypool of Primus to collaborate on “Zelensky: The Man With the Iron Balls,” a joint release to rally support for the Ukrainian people. The track also features Stewart Copeland, Sean Lennon, Billy Strings, and fellow Gogol bandmate Sergey Ryabtsev. Proceeds from the sale of the single will be donated to Nova Ukraine, a nonprofit organization dedicated to providing humanitarian aid to the people of Ukraine.

In addition, Eugene collaborated with NYC punk stalwart Jesse Malin for a cover of The Pogues’ classic “If I Should Fall From Grace With God.” Released exclusively viaBandcamp, all proceeds for that single will benefit the U.S.-Ukraine Foundation, which “supports the development of democracy, a free-market economy and human rights in Ukraine, and the strategic partnership between the U.S. and Ukraine.”

Formed in 1999, Gogol Bordello took their style of Eastern European-influenced gypsy punk and doused it deep into the underground rock of New York City. Imminently beginning a U.S. tour (tour dates below) with the aforementioned European dates to follow, Gogol Bordello have been praised for their recorded material but especially heaped with accolades about their live shows. The Wall Street Journal raved about the band’s live performance saying, “Gogol Bordello mashed punk energy with Eastern European modes for a set that received the wildest reception of any show I saw,” while the LA Times said, “Gogol Bordello celebrates sensuality in both words and raucous, joyful internationalist dance rock.” Pitchfork proclaimed, “Eugene Hutz and his acoustic guitar slapping (think Les Claypool’s hands, but on a six-string) and waving arms summoned the crowd which quadrupled in size by the set’s fourth song. Festival goers were literally running toward the stage” while Consequence hailed “the ever-evolving collective has defied the boundaries of continents and genres in their quest for spiritual illumination through gypsy punk.”