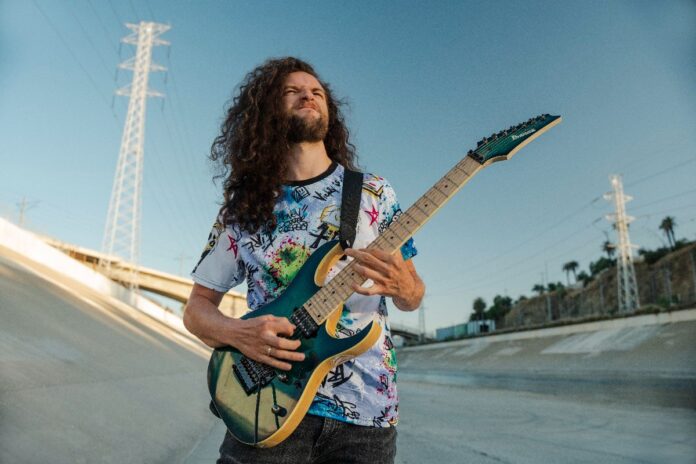 Morgan comments: “This instrumental metal song depicts an uphill battle. A journey to achieve the seemingly unattainable. Could this merely be a mundane montage, a recounting of renewed failure…? Or do we find ourselves on the ever elusive path to glory? Looking inward for motivation, the will to continue. How have we made it this far? Standing in darkness with hope waning, we only find purpose in the pursuit… Once absorbed in our scathing perfection, lost in a fusion of self doubt. We somehow find ourselves at the foot of the mountain. A helping hand appears… Still, what will it take to achieve this?”

Known as guitarist for tech-death outfit Bloodshot Dawn, Morgan has been at the pinnacle of the guitar world for a good number of years already. Now a JTC guitarist, Morgan made it to the top 5 of Per Nilsson’s Guitar Messenger Contest in 2013, alongside Plini, and with his first live performance garnered praise at Guitar Idol 4 in 2014.

Soon after Morgan joined Bloodshot Dawn, following the departure of Benjamin Ellis, who left to join Scar Symmetry. His first ever gig with the band was a sweaty one, the aptly named Incineration Fest in London, which preceded Morgan‘s first tour of Japan with the band.

In following years Morgan has toured with the likes of Decapitated, Virvum, Fleshgod Apocalyse, and across Canada, Japan and Europe. With Bloodshot Dawn Morgan has also performed at Hellfest, Bloodstock, Hammerfest and Metaldays, among others.

Beside music, Morgan is also a professional dancer and choreographer. Having moved to Europe at the age of 18 to enrol in a prestigious dance program, Morgan‘s dance has been integral to his development as a composer and songwriter. His skills as a dancer, and beyond as a yoga enthusiast and martial artist, have helped him develop his own unique, dynamic style with the instrument through years of practice and research.