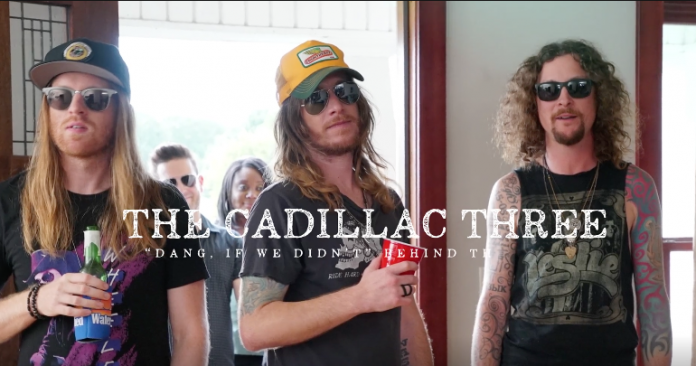 Southern rockers The Cadillac Three have released a behind-the-scenes video for ‘Dang If We Didn’t’, the latest single to be taken from their album ‘Legacy’.

Friends since high school, Jaren Johnston (lead vocals), Neil Mason (percussion) and Kelby Ray (lap steel guitar) may have graduated from playing house parties, but they still know how to have a damn good time. Director Ryan Silver captured the aftermath as tequila, friends and guitars collide for a pool party of epic proportions. The scenes, filmed at a house in Nashville, piece together the events of the night and illustrate the realisations that “dang if we didn’t…”

The genuinely funny behind-the-scenes footage shows the band, cast and director pulling wild stunts and stage moves on set, talking frankly and getting suitably drunk, all with The Cadillac Three’s family and friends in tow.

The official music video premiered on The Independent who said it’s “an unashamed party track that should get you in the mood for Friday night.” The track has also been A-listed on Planet Rock Radio and reached #2 in their airplay chart.

Having already played main stage slots at Download Festivals in both France and the UK this summer, the Nashville natives will be bringing their electrifying performances back to the UK this Autumn with their ‘Long Hair Don’t Care’ tour.