Since its inception in 2014 the Barcelona based festival Be Prog! My Friend has played host to the likes of Opeth, Steven Wilson, Anathema, Devin Townsend, TesseracT, The Pineapple Thief, Magma, Agent Fresco, Camel, Meshuggah, Katatonia, Riverside, Ihsahn and Alcest.

Taking place in the beautiful open air surroundings of Poble Espanyol the site is one of the most important landmarks of tourism in Barcelona. By day the Catalonian hotspot is an architectural museum and at the end of June, start of July it will play host to some of the world’s finest progressive bands. 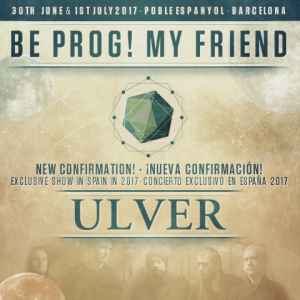 This year saw the festival co-headlined by Steven Wilson and fellow progressive heavy weights Opeth. Now Be Prog! My Friend have announced that it will return in 2017 on 30st June and 1st July with Norwegian experimental music collective Ulver.

The festivlal organsiers comment: ‘Ulver are a fresh triumph of modern music, music that catches your heart and captures your soul. Ulver create music that cult festival Be Prog! My Friend must bring to Barcelona in its fourth edition in 2017.’