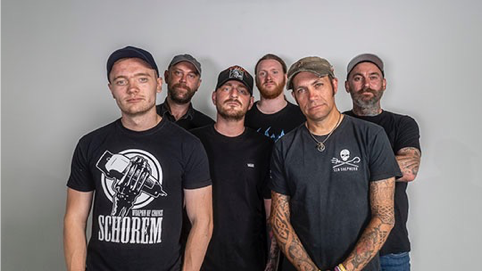 “The Hope is exactly what it says on the tin. It’s a song that shows you when things are at their very darkest, there’s always a light at the end of the tunnel. There’s always help, there’s always hope! The subject matter is probably at it’s most poignant right now with what’s happening with the  world.” – Ferocious Dog.
Watch the powerful, poignant and moving video for ‘The Hope‘, highlighting mental health issues here-  https://youtu.be/HpnseurMhQk

‘The Hope’ also includes previous singles ‘Broken Soldier‘ and ‘Petnrich Rising‘ along with  the ever-present traditional cover, this time, with Hazel O’Connor for ‘Will You’. The album flows irresistibly through tales of historical observations to biting commentary on the plights facing the world today.  The songs follow a rollercoaster of pace and sentiment which will have you wanting to mosh one moment before having a moment to contemplate.

A great follow-up to the album Fake News & Propaganda – Ferocious Dog seem to have the knack of evolving their sound enough to pique your interest, without losing any of the sound or attitude that made you fall in love with them in the first place.  Once they’re allowed out to play again they’ve given themselves a real headache in trying to pick a set list from their now burgeoning back catalogue.

To celebrate the release of The Hope Ferocious Dog’s are undertaking a 24 date tour, which started in Liverpool at the O2 Academy 2 on Friday 8th October and concludes at the Leadmill in Sheffield on Sunday 4th December.

The Hope carries on in the strong tradition of Ferocious Dog albums, with thought provoking and politically charged lyrics, seamlessly combining with dynamic and eclectic music.

Pre order / pre save The Hope go to: https://ffm.to/thehope