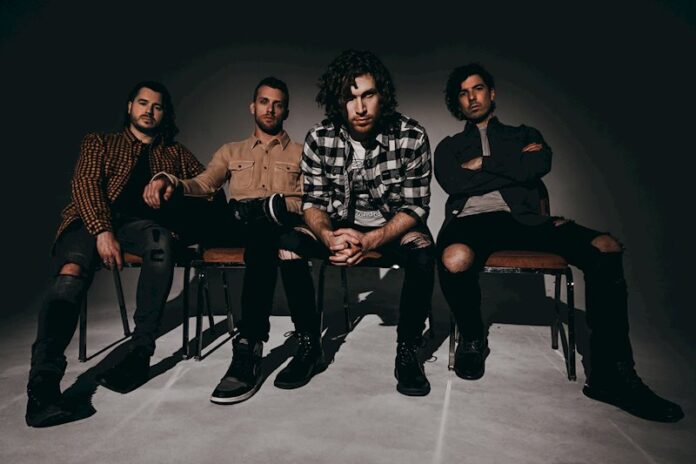 Today, Multi-GRAMMY-nominated rock act NOTHING MORE released their new single “TIRED OF WINNING” via Better Noise Music, which serves as the first official radio single from their long-awaited new studio album. The song is a high-energy rock anthem unapologetically confronting the state of humanity with lyrics like ” So will we steer this ship straight through the void / Or turn on ourselves and die out/ Are you tired of winning? / Cuz it’s already over.” “TIRED OF WINNING” is now available to download or stream across platforms HERE. The official music video for the track also premiered today, giving fans thought-provoking, sci-fi inspired visuals that amplify the poignant lyrics. WATCH HERE.

For more background on “TIRED OF WINNING,” the band’s frontman Jonny Hawkins gives context behind the song’s origin in the below Q&A.

Last month, the band gave fans the first official preview of the new album by dropping a new song and music video titled “TURN IT UP LIKE (Stand in the Fire).” Co-written by all four band members, the song is a sonic rejection of the divisive, digitally-drowned state of the world with lyrics like: “All my friends are dead / They all got fucked by the internet / All my friends are dead / Our brain’s bein’ bugged by the media.”  Billboard gave an exclusive look at the music video, including some statements from Hawkins.  He said, “Something we’ve always pushed for as a band is to question everything. And I think we’ve just gone through a period where it had been unfashionable to question things. Because if you did, you were the pariah, you were the outcast, the other. For the last few years, I’ve felt like an animal in a cage, just pacing, and my teeth are showing more. I had nowhere to vent that rage and that frustration until we put it into this song. I think a lot of people feel this way. You saw it spill over into riots and protests. There’s all this stuff just pent up inside people. Thankfully, we’re going back out on the road soon, so I’ll have somewhere to put it.”

The forthcoming album is the highly anticipated follow-up to the band’s 2017 album The Stories We Tell Ourselves, which earned them three GRAMMY nominations, including Best Rock Album, and Best Rock Song and Best Rock Recording for the single “Go To War.”

Fans will be able to hear the new music live on the band’s recently announced co-headlining U.S. tour this spring, with Better Noise Music label mates Asking Alexandria, with support from Atreyu and Eva Under Fire . The tour is set to kick off in Kansas City, MO on May 13 and end in Houston, TX on June 19, with other stops planned in Nashville, Denver, Atlanta, New Orleans, and more – see full list of dates below. Tickets, VIP Meet & Greets and additional information are available at: http://nothingmore.net/
JONNY HAWKINS on “TIRED OF WINNING”
Q: “TIRED OF WINNING” is a compelling song with lyrics that underline the very precarious position that humankind is in right now: “So will we steer this ship straight through the void/ Or turn on ourselves and die out?” What inspired the song and how it mocks the phrase “winning”?
A: We find ourselves in the same position humanity has found itself over and over again… at the end of a series of self made problems. When we wake up to this, we realize that we are our own worst enemy, yet we focus so much of our energy on externalizing our problems. This song is a bird’s eye view of human nature.

Q: Vocally, the performance is stadium-size and intimate all at once, putting across the urgency of the song’s lyrics. What was going through your mind as you sang with this level of intensity? How will you translate this message into your live performance?
A: This may sound a bit lofty, but when I sing this song I feel as if the entire universe is coursing through my veins. I get goosebumps because I feel in line with something I can’t quite describe… like an old familiar spirit shows up.


Q: The song ends with the lines: “Are we going to live this life?” How do you feel we as a people got it all wrong–and where do you think we might all be headed?
A: I think we all tend to lose the meaning in life by hyper focusing on it and romanticizing it. It’s a paradox… It’s like trying to grasp water in your hand; the tighter you hold, the less you have. The more weight you put on the “meaning” of your life, the less you feel connected to it. The purpose of life might be as simple as life itself… nothing more, nothing less.

Q: Musically, the song is very intense with unique sounds + a jarring rhythm that underline the chaos of this moment we are living in. Can you talk about the recording of the song and how you wanted it to sonically capture the song’s theme?
A: We wanted it to sound like aliens had a baby with a 90’s rock band. That baby grew up, dropped out of college and made our music video.

May 27 – Montclair, NJ – The Wellmont Theater