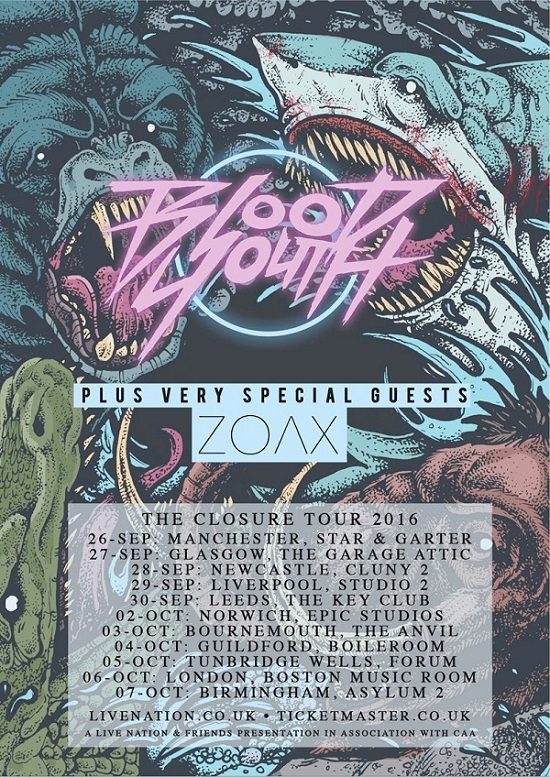 Metal Punks Blood Youth are pleased to reveal a run of UK dates this Autumn. With support from special guests ZOAX, the shows will see the band play material from their most recent release, EP ‘Closure’, out now via Rude Records. Vocalist Kaya Tarsus states: “We’re so stoked to announce the Closure headline tour. It’s awesome to be playing some of our favourite cities and a few new places as well. It’s been a while since we fully toured the UK – this time were swinging harder than ever, see you there!”. Full dates are below, with tickets going on sale on Friday 12th August at 10am at http://www.livenation.co.uk/artist/blood-youth-tickets.

Despite not yet being 18 months old Blood Youth – Kaya squared off by guitarist Chris Pritchard, bassist Max Dawson and drummer Sam Hallett – have already made a hefty dent on the national scene, helped along by attention grabbing appearances at festivals such as Download, Slam Dunk, 2000 Trees, Camden Rocks, Y Not and Hevy Fest; alongside tours supporting the likes of Beartooth, Architects and Every Time I Die. The headline run will also be preceded by yet more festival dates at including: Macmillan Fest, Busterfest, Festivile and Underground Festival.

The band’s debut E.P ‘Inside My Head’ garnered rave reviews, crashing into end of year critical lists. A ferocious call to arms, Pritchard explains that it “expressed the issues Kaya has had for the past six years in a way he hadn’t been able to show until the band started”. Discussing their natural progression to the sophomore, he continues: “WithClosure –  it’s about what he once felt coming to an end. And for all of us this EP is literally closure for the personal anxiety we all felt while writing Inside My Head. The whole thing was a recovery process. Full circle.” Poetic then, that the Closure tour will also mark the band taking their focus from the road and into the studio, as they work on their next release.

Previous article
Early Rebellion
Next article
To The Max