GETTING EDEN BETTER THAN EVER 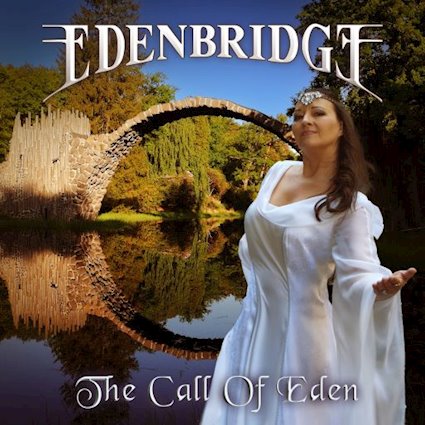 Nine epic, new tracks take the dedicated EDENBRIDGE listener on a musical ride into the realms of finest symphonic metal. Shangri-La not only unleashes a sophisticated range of compositions along with an intoxicating and bombastic sound atmosphere the band is known and loved for, but EDENBRIDGE has created their most diverse record to date: Despite constantly high quality standards and as the new offering proves, they continually expand their musical expression from album to album without abandoning their trademarks. This time, the band has created a fine balance between emotionally magical moments, an ever-present mystical atmosphere and heavy, fast-paced riffage.

Following previously-released songs “Somewhere Else But Here” and the magical “The Road To Shangri-La”, today EDENBRIDGE have premiered a music video for new single “The Call Of Eden”.
Vocalist Sabine Edelsbacher comments: “The Call of Eden deals with power and manipulation. The lie is sweet in the beginning, but bitter in the end. While the truth is bitter in the beginning but sweet in the end. Realise the allurement, manipulation and the exercise of power in the inside and the outside and neither become victim nor offender – combine the powers in your heart.“

Formed in 1998, EDENBRIDGE belongs to one of the most style-defining bands of their genre, spearheading its domain since their pathbreaking debut album “Sunrise in Eden” (2000). Their forthcoming magnum opus, Shangri-La, was recorded at the Farpoint Station Studio and was mixed by Karl Groom. The album was produced by band mastermind Lanvall, who just recently not only debuted a phenomenal live symphony performance with the “Junge Philharmonie Freistadt”, but also makes a fierce racing driver! Watch his video story at the recent Formula 4 ride at the Red Bull Ring in Austria here: https://www.youtube.com/watch?v=awMH-5vrjts&t=8s

Furthermore and as a pleasant cooling, EDENBRIDGE has launched their own Pale Ale! Sabine and Lanvall reveal: “As we are big fans of the “India Pale Ale”, it was near to head in that direction. A strong beer with fruity notes! In our case, the “Shangri-La New England India Pale Ale” was born, blending perfectly with its pineapple, citrus, peach and apricot tastenotes, coming without any fruit extracts but exclusively from the hop. And what shall we say, the result is awesome!“

Find out more about the tasty Shangri-La IPA on the band’s socials and at THIS LOCATION!

The new EDENBRIDGE album will be out on August 26, 2022, the pre-sale is available HERE!
The cover art was created by United Arab Emirates artist, Muhammad K. Nazia: