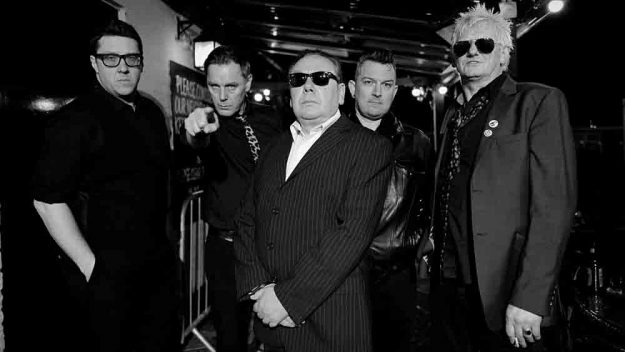 Legendary British rock & roll band The Godfathers return with an almighty bang on their highly-anticipated new album Alpha Beta Gamma Delta. Featuring thirteen tracks of new material, the album is described by the band’s lead singer and founder Peter Coyne as “a sonic tour de force” and is their first full-length studio release since the critically acclaimed A Big Bad Beautiful Noise in 2017.

Written and recorded during the course of the Covid pandemic, the album was produced by The Godfathers’ bassist (and former Damned member) Jon Priestley. Following on from the double A-side single ‘I’m Not Your Slave’ / ‘Wild And Free’ released in 2020, Alpha Beta Gamma Delta is the first Godfathers’ album to feature the new line-up of Coyne, Priestley, ex-Heavy Drapes’ members Billy Duncanson (drums) and Richie Simpson (guitar) and guitarist Wayne Vermaak from The Great St Louis.

“‘Alpha Beta Gamma Delta’ is definitely one of the very best albums The Godfathers have ever made – it’s exciting, dark, dangerous contemporary rock & roll!” states Coyne.

Originally formed in 1985 out of the ashes of The Sid Presley Experience, The Godfathers quickly earned a serious reputation for their electrifying brand of primal rock & roll and their incendiary live shows, aided and abetted by a string of classic radio hits and chart-bothering albums.

With numerous sold-out international tours and festival appearances to their credit, The Godfathers remain a consistent and reliable draw on the world’s stages and Alpha Beta Gamma Delta marks a thrilling new chapter in The Godfathers’ saga.

The album will be preceded by a 4-track EP entitled Midnight Rider on Friday 26th August, featuring two album tracks (‘Midnight Rider’ and ‘OCD’) plus two brand new and exclusive non-album tracks ‘When The Cowards Fall’ and ‘Fade Away’.

The Godfathers will be announcing a full Autumn tour to coincide with the album’s release.