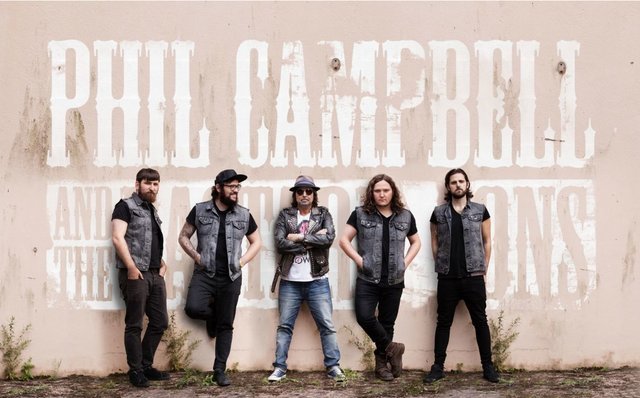 PHIL CAMPBELL AND THE BASTARD SONS, led by the legendary long time MOTÖRHEAD guitarist, have released the second episode of the official studio diary for their upcoming debut album The Age Of Absurdity.

The album is now available for pre-order in various formats here: nblast.de/PCATBSAgeOfAbsurdity

The Age Of Absurdity was recorded at Rockfield Studios and Longwave Studios in Wales and produced, engineered and mixed by Romesh Dodangoda and mastered at legendary Abbey Road Studios in London.

The Age Of Absurdity will feature 11 tracks + 1 bonus track (see tracklist below) and will be released on January 26, 2018 via Nuclear Blast.
​
The fitting cover art was created by Matt Riste.

More on The Age Of Absurdity:
Studio diary episode #1: https://youtu.be/DnMp-CEnUkU

Furthermore the band has announced the dates of their upcoming European headline run.

The band will also appear at Matapaloz Festival 2018 on June 23, taking place at Leipziger Messe, Germany.

More info on PCATBS:
Phil Campbell was the lead guitarist in MOTÖRHEAD for 32 years. He has toured the world, sold millions of albums and headlined the biggest festivals. Phil has a passion for music and it is this passion that has led to the formation of PHIL CAMPBELL AND THE BASTARD SONS.

The band is unique as it features Phil‘s 3 sons on drums, bass and guitar. The band is completed by Vocalist Neil Starr.