With their debut album release on the horizon, Holy Fever have unveiled another new track from the record in the form of ‘Duress’. Vocalist Todd Cooper explains the feeling behind the track – “The sense of urgency and aggression in “Duress” mimics the headspace we were in at the time we wrote it. We were toward the end of writing the record and simultaneously exhausted and filled with adrenaline as we started to see the finish line. Sam had this idea that the chorus would just be one note and the lyric would be one word. This is one of our favorites to play live.”

‘Duress’ is the opening track on Holy Fever’s first full-length record, ‘The Wreckage’, which the band will be self releasing on 8th April, 2016. Comprised of members of underground punk favourites American Nightmare, The Hope Conspiracy, and The Explosion, and with crossover members of indie-pop band Beginners, Holy Fever’s sound feels recognizable, yet totally unexpected. ‘The Wreckage’ is marked by unlikely combinations, punctuated by surprising hooks; challenging punk convention.

The first single to be released from the record, vigilante justice anthem, ‘Find your Fame’, feels like the rebellious lovechild of Bikini Kill and The Hives exemplifying the dueling vocals from Todd Cooper and Samantha Barbera (also on bass), gritty guitar riffs from Neeraj Kane and Brian Masek, and Andrew Black’s explosive drumming. 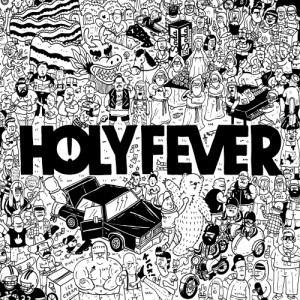 The artwork for the ‘The Wreckage’ was created by renowned LA-based artistLuke McGarry and the band recorded in Paul Miner’s (ex Death By Stereo) studio in Orange, CA with Holy Fever self-producing and Miner engineering.