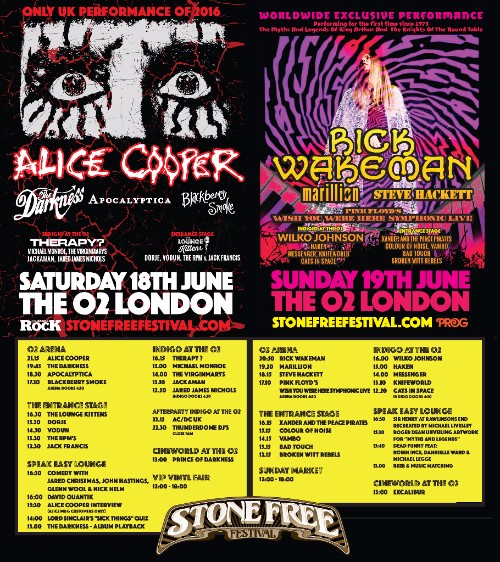 New additions – and stage times announced!
With two weeks to go until this year’s inaugural STONE FREE FESTIVAL, Kilimanjaro Live and The O2 are proud to reveal even more additions to the bill and the full running order for the weekend.

The legendary rocker and Dr Feelgood guitarist Wilko Johnson will be headlining the Indigo at The O2 on Sunday after performances from psychedelic rockers Messenger and fellow progressive rock band, Haken.

The Entrance Stage’s latest additions include Southampton singer/songwriter Jack Francis who will be opening the stage on Saturday with his unique blend of soul, folk and Americana. Birmingham quartet Broken Witt Rebels will be opening the Entrance stage on Sunday combining the power and intensity of indie rock with the finesse and delicacy of soulful blues. With an outstanding lineup of fresh talent, the Entrance Stage is a must see location to catch some of the UK’s most exciting new live bands.

Saturday at the Speak Easy Lounge will also feature a performance from stand-up comedian Glenn Wool. The Canadian, who now lives in the UK, veers between sagely political and gleefully silly and has had numerous TV appearances including starring in a self-titled show produced for Channel 4’s ‘comedy lab’ season in 2004. In 2012 he also appeared on the BBC’s ‘Russell Howard’s Good News’, and in 2013 appeared on Comedy Central UK’s ‘The Alternative Comedy Experience’.

What happens when mirth turns to murder? When the screams are not from joy, but flesh-ripping pain? The Speak Easy Lounge on Sunday has the answer with the addition of ‘Dead Funny’, an audacious anthology of tales of terror from some of the brightest lights in UK comedy.

A unique exploration of the relationship between comedy and horror, ‘Dead Funny’ will feature performances from a number of talents including comedian Robin Ince. Best known for presenting the BBC radio show ‘The Infinite Monkey Cage’ with physicist Brian Cox, Robin also won the Time Out Award for Outstanding Achievement in Comedy and was also nominated for a British Comedy Award.

‘Dead Funny’ will also feature Danielle Ward, a comedian and writer who has appeared in Charlie Brooker’s ‘Newswipe’ and who won the Time Out Critic’s Choice Award for Best Newcomer in 2006. She has written for Harry Hill, Lee Mack and Radio 4’s ‘The Now Show’ and ‘The News Quiz’. It also features comedian, writer and blogger Michael Legge who has written for the BBC, ITV, Channel 4, MTV and VH1. He has been nominated for a BAFTA Award for his writing on the MTV website for the show ‘The Osbornes’.

Full lineup and scheduling for the Stone Free Festival below:

Main Stage Arena
The main stage will include Alice Cooper on the Saturday night in his only UK performance of 2016, and Rick Wakeman on the Sunday in a world exclusive performance of his flamboyant, 12-million-selling masterpiece ‘The Myths And Legends Of King Arthur And The Knights Of The Round Table’ for the first time since 1975.

Indigo at The O2

Stone Free Festival will feature performances throughout the afternoon at Indigo at The O2 and when the arena finishes on Saturday night, the excitement doesn’t stop there! There will be an after party with AC/DC UK, guaranteed to shake you all night long. And if that isn’t enough, there will be a DJ set from ‘Thunderdome’. Having likely not been to sleep since Thursday and powered entirely on the vitamins available in double bourbons, expect them to bring enough dirty rock’n’roll to make Indigo at The O2 tear itself a new emergency exit.

The Entrance Stage
For all Stone Free Festival goers, as you enter the main entrance to The O2 complex the stage will be there to welcome you with a bang and will have performances throughout the afternoon as your soundtrack to the entertainment.
Saturday
16:30 – The Lounge Kittens
15:30 – Dorje
14:30 – Vodun
13:30 – The RPMs
12:30 – Jack Francis

The Beer Garden
With no chance of rain stopping play, there will still be the chance to bask outside in London’s summer sun. Just beside the entrance to The O2 will be The Beer Garden with street food stalls and more live music to entertain fans as they eat, drink and get merry.
Rock Royalty VIP Packages including Meet & Greets
Artist Meet & Greet tickets are available as part of the Rock Royalty VIP experience over the weekend that allows customers the opportunity to meet the headliners. The Meet & Greet with Alice Cooper is now SOLD OUT but there is still the chance to meet Rick Wakeman on Sunday. You can see all details of VIP packages here.

The Stone Free Cinema
Cineworld at The O2, the Stone Free Cinema will be screening two cult classics. John Carpenters ‘Prince Of Darkness’, which sees Alice Cooper lead an army of zombies in the supernatural horror will be shown on Saturday, followed by John Boorman’s ‘Excalibur’ on Sunday, the definitive King Arthur movie and warm up to Rick Wakeman’sMyths and Legends… performance.

Classic Rock Vinyl Fair
Free to the general public, VIP Record Fairs will host the inaugural Stone Free Festival record fair on Saturday 18th June. VIP Record Fairs produce more Vinyl Record Fairs than any other company in the world! At the Stone Free Festival they will present specially selected vinyl dealers from around the UK. You can browse and buy vinyl from Prog Rock, Punk Rock and Hard Rock to Glam Rock, Classic Rock and 60s rock. On Sunday 19th there will be various vinyl dealers and market stalls for you to meet some great sellers and maybe pick up a bargain? REMEMBER – RECORDS ARE FOR LIFE NOT JUST FOR CHRISTMAS!