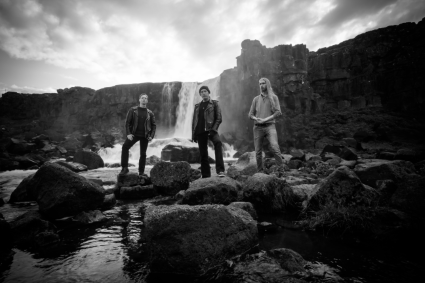 Since 2008, the art of the outstanding Icelandic/German Metallers Árstíðir lífsins (Icelandic for “The Seasons of Life“) truly breathes Old Norse history on all levels. Now, and with their 3rd album Aldafoðr ok munka dróttinn (Old Icelandic for Óðinn and the God of the Monks), Árstíðir lífsins further depict the vivid and cruel Icelandic Middle Ages from the most realistic angle possible.

Entirely sung in Old Norse-Icelandic and with added Skaldic stanzas from the world-known Icelandic sagas, Aldafoðr ok munka dróttinn takes you on a journey to the uttermost vivid and mythic Conversion of Iceland in the year 1000 as it is displayed in the vernacular medieval sources from the stormy North-Atlantic. Árstíðir lífsins, however, represent authenticity on all levels: as diverse as the world views of Christians and heathens are, also the composition and arrangement of music is onAldafoðr ok munka dróttinn: From ambient archaic folklore patterns, supported by dark chants and classical instruments, to Black Metal elements in their finest Norwegian tradition and epic double-bass driven Viking Metal parts, the musical abilities materialize and teach a powerful lession in real craftmanship. So behold, this profound journey is truly intended to capture the listeners and directly depart them into a long gone time of struggling worshippers of Óðinn and the God of the Monks.

Aldafoðr ok munka dróttinn is a full length album, in all its meanings; to depict and express such various topics of Scandinavian history and myth, a total of 81 minutes in playtime was necessary, divided into nine (individual) songs on two CDs or LPs. The album was composed and recorded in Germany and Iceland between May and November 2013 and then mixed and mastered in December 2013 by the experienced hands of known producer Markus Stock at Klangsmiede Studio E (among many others Empyrium, Helrunar and Secrets of the Moon). Be prepared – this album will be nothing less than a true milestone in Old Norse-inspired metal music.