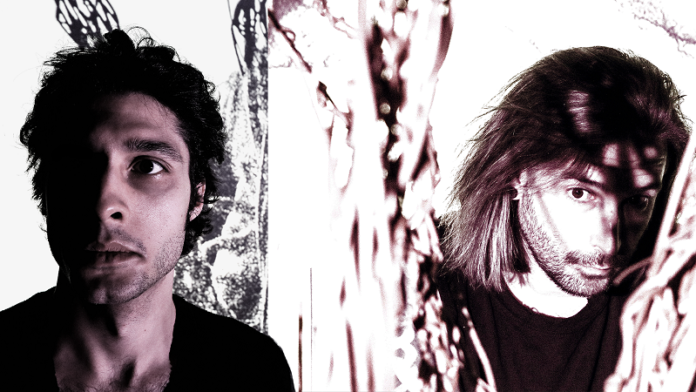 MARY AND THE RAM have revealed the visualiser video for their new single, Black Cat And Staircase. You can watch it here: https://www.youtube.com/watch?v=EHSGCEqTi1o

The band is the studio project of VIAPERFORMANCE founder Kiran Tanna (vocals, guitars, keyboards, and programming) and Dom Smith from SEEP AWAY on drums. The new single is an epic six-minute instrumental, which shudders with an energy and menace that demands there’s little chance of much middle ground here; little chance of anyone thinking it’s alright. It will polarise opinion, leaving some listeners in awe and some in revulsion, each looking at the facial expression of the other with a mixture of disbelief and disdain.

The single is the duo’s first new material to be released since 2020 which perhaps suggests lethargy, but the truth, as they explain, is quite the opposite: “Black Cat and Staircase is a doorway. That is, it’s the entrance to a sprawling collection of tracks that we’ve been working on over the last two years in the background, privately but with purpose. There’s enough material now for a double album but we’re being selective and releasing tracks on a drip feed. Each drop informs the next, helping us decide who we’ll collaborate with, what instruments to work with, where we’ll record, how we’ll assemble those recordings, the artwork, the mood. That approach has given us a chance to explore some new territory as a band – and Black Cat and Staircase seems like a good entrance point.”

The duo’s writing and recording process has been heavily influenced by genre fiction, borrowing approaches, textures, tones and topics from horror and cult cinema. Likewise, it’s inspired by years of true crime research and experimentation with the occult – and by their work as writers in those fields, outside music. Then, inside music, it’s given them the opportunity to open their work to new sounds.

“We’ve never obscured our love affair with Nine Inch Nails,” they elaborate, “but on Black Cat and Staircase, and on the other new tracks, we’ve been able to experiment with more and different sounds, inspired by bands like Autechre, Aphex Twin, Crystal Method, Infected Mushroom and so on. We’re big fans of these artists and we want to show them some love. So, it’s a doorway onto all this, yes, but the track should also stand alone; and that’s another reason for this single release. Perhaps it’s title music for a film someone’s yet to make. Or maybe it’s the sound of a game – remember Quake? We loved Quake. Perhaps it’s music to put on when you drive or run alone at night. And maybe this is personal, but Black Cat and Staircase feels visceral to us; visceral and aggressive, and ready to open itself and bleed everywhere – a bit like something being born.”