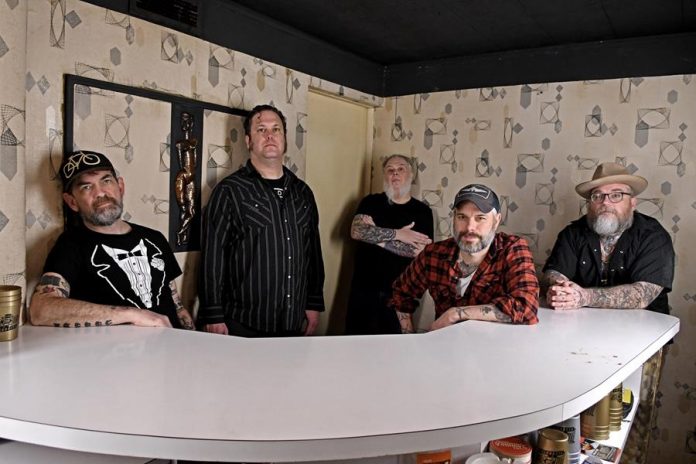 Celebrated rock / alt­-country quintet Lucero celebrate 20 years together with the announcement of the August 3rd release of their ninth studio album Among The Ghosts (Liberty and Lament / Thirty Tigers). Co-produced and engineered by Grammy Award winner Matt Ross­Spang (Jason Isbell, Margo Price, Drive­by Truckers), Among The Ghosts was recorded in the band’s hometown of Memphis, TN at the historic Sam Phillips Recording Service. Two new songs from the record – To My Dearest Wife and For The Lonely Ones – are now premiering at Rolling Stone.

Among The Ghosts features 10 new songs written by lead singer/co-founder Ben Nichols that are steeped in the southern gothic inspired vignettes that have become a Lucero trademark. This time around, the seminal band pulls back on the big arrangements and Memphis-styled horns of their recent work for the more straight up, rock band style of their earlier years. Nichols, and bandmates Brian Venable (guitar), Roy Berry (drums), John C. Stubblefield (bass) and Rick Steff (keyboards) maintain their footing in their blues, rock, country gospel and R&B foundation, while simultaneously pushing their sound forward.

Nichols’ penchant for writing songs that immediately create mental imagery is at the forefront of Among The Ghosts. The band sets the tone masterfully with the perfect balance of nuance and grit, where delicate moments can exist equally in the same space as anxious restraint, as heard in the opening title track. The narrator longs for the family that distance is keeping him from, before the snarling chorus blasts out with intensity. The moody Back To The Night features a haunting spoken word interlude by actor Michael Shannon. Loving, originally recorded by Nichols and appearing in the film Loving (from his filmmaker brother Jeff Nichols), receives a fresh full band treatment on the new album. The heartfelt Always Been You speaks tenderly of the trials and tribulations of love while the deeply moving To My Dearest Wife was inspired by Civil War letters written by soldiers that can easily apply to our fighting men and women today.

For 20 years, amidst the highs and lows many bands experience, Lucero has remained grounded firmly in their blue­collar ethos. They create music with a soul that provides a common ground for many. As a live band, they have consistently brought it night after night with exhilarating performances in a communal atmosphere. The droves of fans who jumped on board have remained for the journey through the years, and they continue to bring others along for the ride. With Among The Ghosts, it is clear that Lucero still has many miles left to travel.

Previous article
VOLBEAT – FOR FREE!
Next article
ROBERT COMES OUT TO CRAY AT BLUESFEST