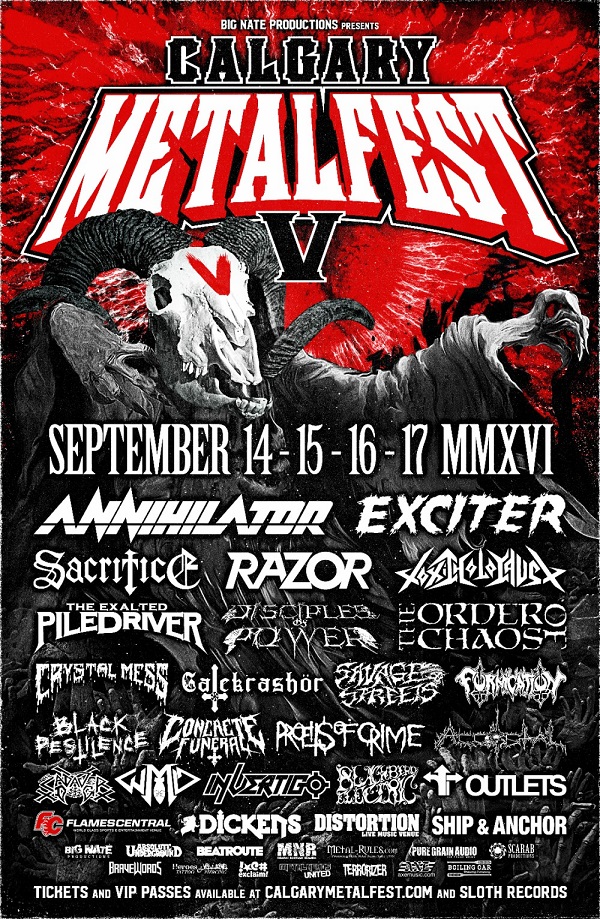 Original line up back for the first time in over 30 years!

Canadian thrash legends EXCITER will be taking the stage at this year’s Calgary Metalfest on September 17th at Flames Central presented by Big Nate Productions. Their performance is one for the history books as they will be reuniting theiroriginal line up for the first time since 1985 plus sharing the stage with fellow Canadian thrash pioneers ANNIHILATOR, RAZOR and SACRIFICE. All have never before performed on the same stage together, making the concert a historic moment in metal.

EXCITER guitarist John Ricci comments:”We are really stoked to participate at the fest with such great bands that came out of Canada and went on to establish themselves as serious contenders in the metal market around the globe. The last time the original line-up played together was the summer of 1985, our last tour together across the USA. When we got back together in 2014, it was like we never broke up, it was like instant musical chemistry!”

Tickets and VIP Passes on sale through https://calgarymetalfest.com and at Sloth Records in Calgary.

New this year, VIP packages will be offered and include sound check viewings, band meet and greets, and autograph sessions. Check out http://calgarymetalfest.com andhttp://bignateproductions.com for more info!

Thursday, September 15th at Distortion sees THE EXALTED PILEDRIVER in their first ever Western Canadian performance with support from CRYSTAL MESS, SAVAGE STREETS, PROFITS OF CRIME and ACCOSTAL. Info here.

Wednesday, September 14th Kick-off Party at The Ship and Anchor, FREE SHOW with THE CADAVOR DOG, W.M.D., IN/VERTIGO, BLACKBIRD ELECTRIC, OUTLETS BAND. Info here.
Calgary Metalfest, in its fifth annual year, started in 2012 by Nathan “Nate Reno” Renaud after his experiences working at Monsters of Rock in 2008 and as Stage and Production Manager of Noctis Metalfest from 2008 to 2013. Nate also founded and plays bass in KYOKTYS and is a live and studio audio engineer with over forty titles and hundreds of shows to his credit. Check him out at http://bignateproductions.com.

Through its live charity auction, Calgary Metalfest has raised a total of $4000 for Make-A-Wish Southern Alberta and is shooting to sponsor an entire $10,000 Wish this year! Auction items will include autographed posters, guitars, art, festival tickets, and more.