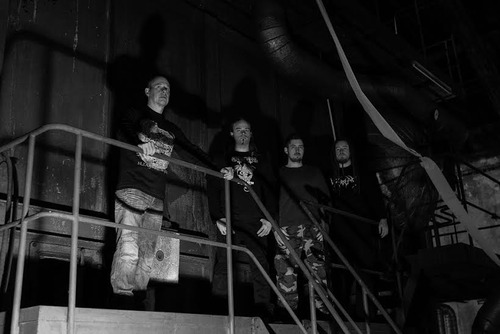 Take the motoring riff blasts of DISMEMBER, UNLEASHED, and early ENTOMBED, blend in the grime of a HIGH ON FIRE, add a quart of sludge, and you’ve got Germany’s CONVICTORS.

Now that’s a damn tasty mixed drink. The sound on this one is punishing and dirty as hell. The speed picking and drum blasts are downright smothering, the blitzkrieg only subsides when doomy slow to mid-tempo sections take over, and it’s not long before severe beatings begin again.

The vocals move from classic Swedish death growl to the gruff, Doomy guitar harmonies are heard throughout — melodic yes, but never sounding like the newer school of Swedish death metal. Rather, the lead work and the downshifts in tempo always produce a hopeless, miserable feeling. Wide smiles and sparkling eyes are nowhere to be found on this album.
In the span of twenty-eight years, CONVICTORS had only left us with one demo and an reunion EP before finally unleashing this debut album. A truly dangerous album made by a monstrous quartet. Be on the lookout.