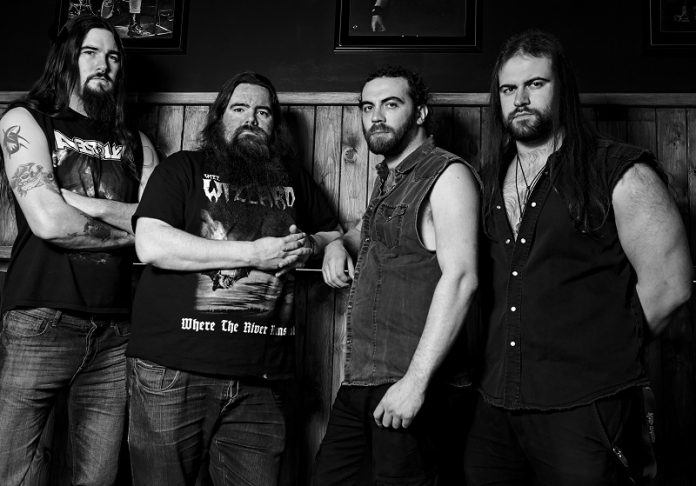 British metal band Absolva have released a free mp3 download of the song ‘Life On the Edge’ taken from the band’s forthcoming double album ‘Defiance’ which is set for official release on 28th July 2017 via Rocksector Records.

Absolva contains one current member of Iced Earth and three current members of Blaze Bayley, and is proud to extend its’ prolific release schedule which will now see them bring out their fifth album in as many years.

The new songs bear all the characteristics well recognised in great Absolva tracks, including insanely catchy choruses. Chris Appleton continues to excel, now with an unmistakable lead vocal which gains increasing respect year-on-year, whilst his guitar work is expressive and passionate, as well as viciously fast at times, and testament to the heart of guitarists he’s worked and toured with such as Michael Schenker (MSG / UFO), Dave Meniketti (Y&T), Doug Scarratt (Saxon).

The rhythm guitar work of Luke Appleton (permanent bassist with Iced Earth) complements his brother’s lead work perfectly. Luke combines sledgehammer power with surgical accuracy which locks in sensationally with the band’s rhythm section. Drummer Martin McNee is like a a rock drummer within a metal drummer’s skin, so we get the soul of Bill Ward (Black Sabbath) infusing the heart of Charlie Benante (Anthrax) or Brann Dailor (Mastadon). Meanwhile, bassist Karl Schramm is increasingly referred to as ‘the new Steve Harris’ and although the quality of his fingerstyle playing owes much to his Iron Maiden hero’s technique and sound, on this new record he stamps his own authority.

As said, ‘Defiance’ is a double album with 12 new recordings on Disc One, whilst Disc Two (bonus disc) opens with ‘Harsh Reality’, originally released as a single in 2016, followed by 3 songs and a drum solo which were recorded live at Huskvarna Festival in 2016, plus new acoustic versions of 3 songs from the band’s back catalogue. The content of the album was inspired by fan suggestions and is a generous offering.

Luke Appleton says…. “We especially wanted to offer our fans something special, a little extra content, and having asked them what they wanted, this combination of new material, plus live and acoustic versions is what many people said. We also especially wanted to dedicate the album to Wizz Wizzard who passed away late last year and was a great friend, supporter and singer in his own right, so the inclusion of the song ‘Reflection’ which he and I originally performed together was a very natural thing to do and for me is one of the stand-out tracks”.

Disc One was recorded in January-February 2017 at Axis Studios, Doncaster, England, mixed, mastered and produced by Matt Elliss.

On Disc Two, ‘Harsh Reality’ was recorded at Axis Studios, Doncaster, England, mixed, mastered and produced by Matt Elliss in August 2015. The live tracks were recorded by Thimmiy Mueller at Huskvarna Rock and Art festival, Sweden on 1st October 2016 then mixed and mastered by Chris Appleton.The acoustic tracks were recorded, mixed and produced by Chris Appleton and Luke Appleton at Rocksector Records HQ, Manchester, England in February 2017.

Coverart design is by Caio Caldas at Cadiesart, whilst the original ‘alien womb’ logo design is from Mike Collins at Lungfull Design.

There is also a lyric video for the track ‘Rise Again’ which can be streamed at Youtube via this link https://youtu.be/uhue1tEVxuo

Absolva will be touring to promote ‘Defiance’. The shows confirmed so far are these….