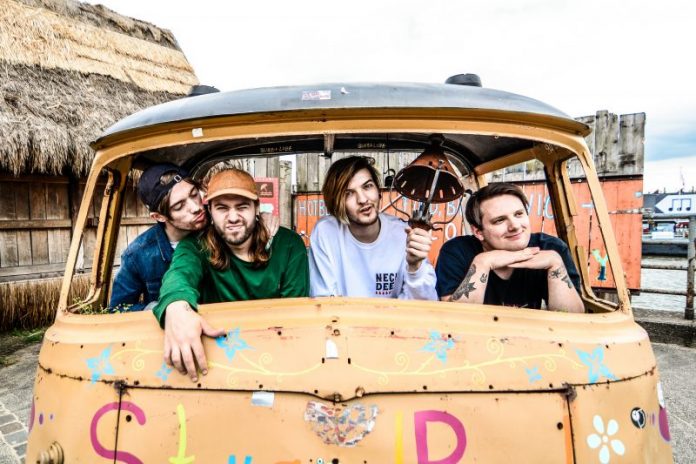 Liverpudlian Pop Punks WSTR have unveiled their punchy new single and video for track ‘Footprints’ with vocalist Sammy Clifford saying:“It gives an insight into life as a WSTR, and it’s great to watch back over all the memories, even though to be honest we can’t remember half of the footage actually happening!” Footprints is the second track to be released from their forthcoming debut album, ‘Red, Green Or Inbetween’, due for release on Jan 20th through No Sleep Records. Clifford reveals the track is about: “Two people growing apart and even though you might still love that person, you know it isn’t right and you are desperately trying to cling on. In the end you just have to let some things go.”

After the success of their debut EP ‘SKRWD’ (No Sleep Records – Sept 2015), the band have gone from strength to strength and achieved accolades that most acts don’t achieve in a career, off the back of only one EP. 2016 saw WSTR repeatedly circuit the UK and Europe with international touring bands such as Neck Deep, A Wilhelm Scream, Moose Blood & Creeper, and warmly welcomed onto established festival slots, at Slam Dunk Festival, 2000 Trees, Hevy Fest and Butserfest.

“When we started the band we were all in a situation of waking up every morning, going to work, coming home, going to sleep,” recalls Clifford, explaining the origins of his band’s blunt moniker; “It felt like we were just wasted space & not really doing much with our lives other than working. This band has given us all something to do & to be proud of. Putting out an album is a big scary step, but it’s been a long time coming and we’re ready to see what the world has to say and hopefully see some more of it”.

On the live front, late October through to early November sees the band heading out on a UK headline tour with support from Milestones. Guitarist Kieren Alder declares: “We’re super excited to finally be able to play new songs from the album live, as we’ve been touring the EP for a while now so it’ll be good to freshen up the set, especially for the fans who have seen us before!”
Their first set of Irish dates are also planned for November as they support fellow pop punks ROAM. All live dates currently announced, are below.