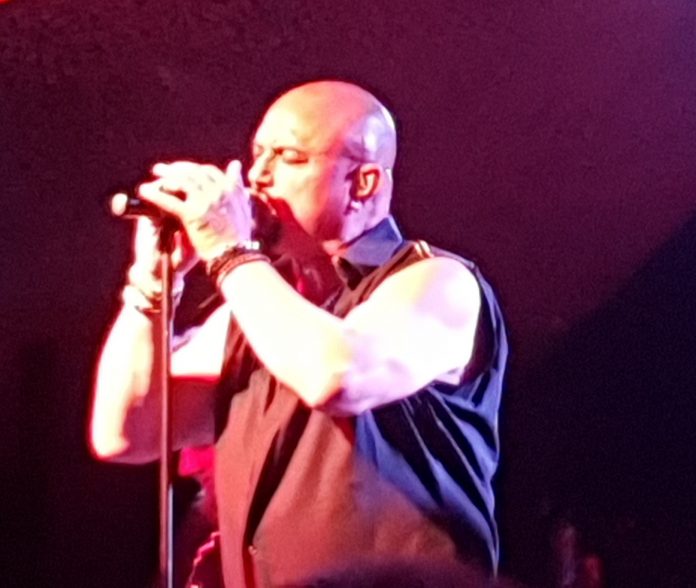 In the red corner, weighing in with actually being Queensrÿche are, well, Queensryche. The band who, at Bloodstock a couple of weeks back, made a point of ending their show with the words: “We are the original, the only, Queensryche.”

In the blue corner, is the bloke that sang, wrote and largely brought to life, these songs. Geoff Tate.

Everyone here, in the band and in the crowd, will have their own opinion as to who has got the most legitimacy to own these songs, but it is a battle that is unlikely to be resolved.

Obviously, though Tate feels strongly enough to tour them.

He has just put out a brilliant record with his Italian band Sweet Oblivion, he has just finished a world tour with Avantasia (their drummer Felix Bohnke is with him tonight) but this is the “Greatest Hits” tour – and that means one thing only. An hour and a half of Queensryche classics played by the man who made them famous.

Which in turn means from “Screaming In Digital” to “Eyes Of A Stranger” there are some absolutely mighty songs, there really are. “Operation: Mindcrime” sounds as fresh now as when it was done originally – and what makes this superb is that even stripped away of the theatrics that were part of it the first time I saw Tate do it over a decade ago is that the power of the song comes through.

It isn’t the only one either. “Empire” (always my favourite, if I am allowed to show bias) crunches away, and when he dips into the really early stuff, like “The Lady Wore Black” there is plenty here to get excited about.

Tate too, has an easy charm. To paraphrase Kiss, these are his people, this is his crowd, and he merrily chats to them like an old friend (which I guess in a manner of speaking they are?) about drinking Whiskey in Glasgow last night, about being hot in England for the first time ever, and about just what these songs have meant to people over the years.

The most famous one (“I’ve even had to talk to someone about this in a men’s urinal….!”) “Silent Lucidity” has lost none of its mass appeal, while “Jet City Woman” boasts a chorus that sounded great in a field the other week and resonates here just as loudly.

The aforementioned “…..Stranger” (of course) concludes the gig, and it does so with an answer to the question why he does this? Because he can. And to a large extent he probably should. But Geoff Tate is also talented enough – with enough another stuff in his canon – to try something new too and that would be fantastic to see.