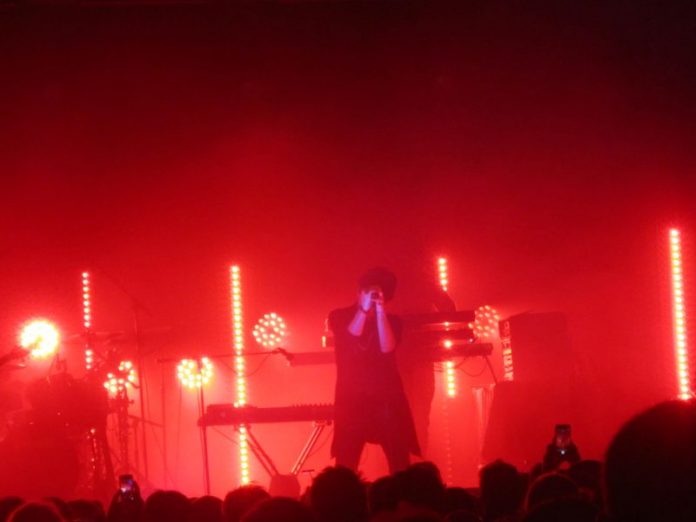 I have always liked Gary Numan or Gary Anthony James Webb as his birth certificate states.

I first saw him a couple of times in September 1979 at the Birmingham Odeon and the Coventry Apollo on the Pleasure Principle Tour with Orchestral Manoeuvres in The Dark as support.

I even took a friend to Wembley Arena in April 1981 to see his farewell concert with music/mime/dance/pop troupe Shock and Canadian electric violinist Nash the Slash.

Thankfully his retirement was short-lived and I have seen him a few times in the last two decades.

So, I head out tonight to the stunning art deco 1000 capacity venue in Leamington, where a near enough sold out audience await the androgynous “android” persona of our hero.

As the lights dim a chant of “Numan, Numan” goes up from the faithful as an instrumental piece of music allows the group to enter the stage.

It`s straight into ` Everything Comes down to This` from 2013`s Splinter (Songs From A Broken Mind).

This outing is one of four dates that are billed as The Pre-Release Mini Tour. A few shows to air some tracks off the upcoming twenty-first studio album “Savage: Songs From A Broken World” due in September. So tonight`s set contains a fair few from this forthcoming release, a few from “Splinter (Songs From A Broken Mind)” and a few classics thrown in for good measure.

`Ghost Nation`, `Jagged`, `We`re the Unforgiven`, `Mercy` and ` Here in The Black` are shared with the artist twisting, turning, crouching and arching himself like a man of half his age, listening to these dark more industrial metal tracks, you can really understand how Numan has influenced the likes of Dave Grohl, Trent Reznor and Marilyn Manson.

The new single from the forthcoming album `My Name is Ruin` is up next before and a small special guest to the stage in the form of his 11-year-old daughter Persia to join him on backing vocals and the chorus of “my name is ruin, my name is vengeance, my name is no one, no one is calling.”

It works really well and it was heart-warming that it allowed us to see a more human side to the guy as he hugs his young daughter after the song.

The place goes crazy as the classic `Cars` is aired before `When The World Comes Apart` and `Love Hurt Blead` close out the show.

A couple of minutes pass before the guys return to the stage for the encore of `Down In The Park` and `Are “Friends” Electric?` from the “Replicas” album.

Well what can you say. Tonight, was a cracker of a show which covered all emotions from this pioneer of electronic, new wave, industrial music. It was a night where I once again realised what a brilliant performer he is and what I really like about him. Thank you to The Pleasure Principle.