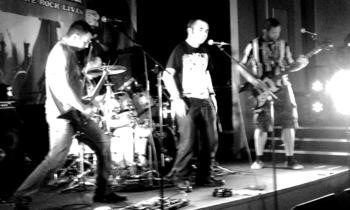 UK Prog band Gandalf’s Fist bring out brand new record “Forest Of Fey” next Monday (20th October) and as frontman Dean Marsh explains, it might not have come into being were it not for a walk in the woods.

“I actually had no intention of releasing a Gandalf’s Fist album this year,” admitted Dean, when we sat down for a chat ahead of the release date. “Then, I was walking through the forest near my house one Sunday on a really blustery day and the title track, pretty much in its entire 8 minute complexity composed itself there in my head. As soon as I got home I put it down in demo form and then the rough outline of the concept began to form.”

“….Fey” is noticeably more folk orientated than some of GF’s previous work, and according to Dean, that is part of a definite plan, determined almost as soon as the walk was over: “As soon as I got home I put it down in demo form and then the rough outline of the concept began to form. Luke [Severn – who along with Dean provides vocals] and I had previously talked how we would love to do something more folky again – like with our “Songs from the Solway” EP – and we came up with the idea of someone being lost in an enchanted forest.”

A record of astonishing twists and turns, “Forest Of Fey” has many special guests, included Nightwish man Troy Donockley and guitarist Matt Stephens, and Dean is quick to praise the pair: “I just knew that I wanted Troy Donockley on board. I love the sound of that whistle of his – it has a haunting quality all of its own and that’s exactly what I was after with this album. It also helped having Matt Stevens contributing a couple of ideas as that’s definitely a quality of his playing!”

The band played Planet Rockstock last year and Dean says that further live shows are “high on the agenda,” but admits the gigs might have to wait: “The problem is, we’ve already got some demos and ideas in the pot for the next record. Luke’s got an idea for a concept and I’m ready to roll with it!”