Fury Dream Of The Lightening 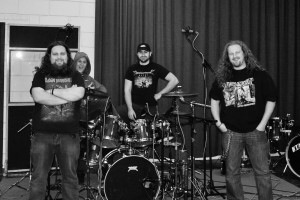 “The Lightening Dream” which features 10 magnificent tracks in the vein of Classic British Heavy Metal, follows the bands two acclaimed EP’s, “Fury” and “Burn The Earth.”

The band were in confident mood when MVM caught up with them recently in Birmingham. “It’s a really strong record,” singer/guitarist Julian Jenkins told us, after a sweaty and turbo charged gig. “We are really pleased with how it’s turned out and how the new songs have been received.”

Fury have been touring with Attica Rage on the Scottish biker band’s by now annual September trek and, admits Jenkins, the atmosphere on the jaunt has been fantastic: “It’s been great to do these shows with them,” he smiled, “they are great guys and the new songs have been received really well.”

The four piece have built a formidable live reputation themselves – even seeking out Birmingham’s Academy 3 on one memorable night – and Jenkins confirmed that the band intended to “get out as much as possible” in support of the new record.

Look out for a full review of The Lightening Dream in the next few days.