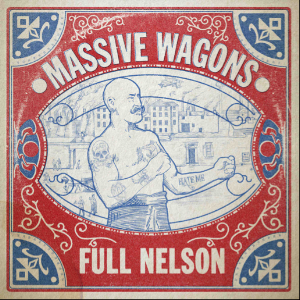 Led by the charismatic frontman Baz Mills, Massive Wagons forthcoming record “Full Nelson” showcases the evolution of the band’s song writing both sonically and lyrically. From the rock driven opener “Under No Illusion” to the bluesy feel of “Sunshine Smile”, from the slower, passionate and heart-felt “Northern Boy” to the heavier “Robot (Trust In Me)”, this is an album of crafted songs and intense performance. “Robot (Trust In Me)” was also produced by Mike Exeter (Black Sabbath, Judas Priest).

Massive Wagons started 2018 with multiple sold out headline shows, including The Borderline in London. The band will continue to tour throughout the UK and Europe in 2018, and already have performances confirmed at Download Festival, Camden Rocks, Steelhouse, Boomtown and a sold out special guest show with Blackberry Smoke – with more to follow.

Previous article
ASHES IN THE SEA
Next article
FLIGHT CASE