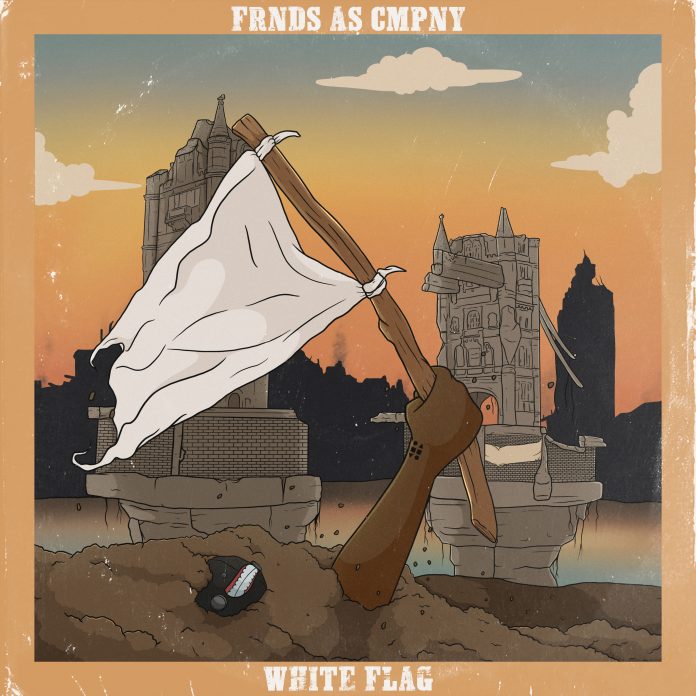 FRNDS AS CMPNY is a London-based producer, singer-songwriter, and multi-instrumentalist. His debut five track EP `White Flag` is released this month and highlights his rich and melodic vocals shared over an electronic pop foundation.

`Catching Fires` opens this extended play with an acoustic guitar and piano keys before the singer`s haunting vocals join in to relate a tale, as reported by the singer, of “doing the impossible and knowing it’s okay to be different”, “This song is my mantra.” As the number progresses it`s broadened out with strings or an orchestral texture. The vocals are almost operatic at times as they lead us through this quite breath taking but melancholic and contemplative offering.

There`s a cover of Tears For Fears 1982 hit `Mad World`. The song was covered by Gary Jules for the film Donnie Darko and was influenced by the theories of Arthur Janov an American psychologist, psychotherapist, and writer, according to TFF. The lyric “the dreams in which I’m dying are the best I’ve ever had” suggests that dreams of intense experiences such as death will be the best at releasing tension. This version was more in line with the Jules cover but had it`s own style with vocals seemingly multitracked on the chorus. Nevertheless, it retained that slight feeling of unease and tension.

There was a delightful, dreamy feel to synth-led `We Are Only Human` which became really quite mesmerising as it progressed. A number not to read too much into but to just allow it to overtake you.

I have to say I loved the first line “Hate to see you alive but I’d hate to see you dead” from `White Flag` a song about “forgiveness and not forgiving,” the singer explains. It would seem to relate to the breakdown of a relationship with a further lyric of “truth comes out in the end”. The vocals do convey some bitterness and pain but as the title refers it seems to offer up the opportunity of ending the recrimination.

This all too brief offering ends with the introspective `Who Killed Paradise` which starts with some hand percussion before taking a more drum and bass like lite vibe.

I have to admit I thought there was a hint of the musician Seal in the vocal, but I felt that was no bad thing. It has a vast feel about it as it ebbs and flows. The singer has shared that “I want the song to take you from past to present to future and play constantly within those realms. Searching for the answers”. An intense but interesting composition to end on.

I have to say FRNDS AS CMPNY has a wonderful deep and rich vocal range and these five tracks on `White Flag` really bring that to the fore. The songs relay a variety of emotion throughout touching on love, hate, pain, pleasure, jealousy, and regret. I was blown away by what I’ve heard so far and will certainly be keeping an eye on how this artist progresses.

Who could want more than having FRNDS AS CMPNY such as this?