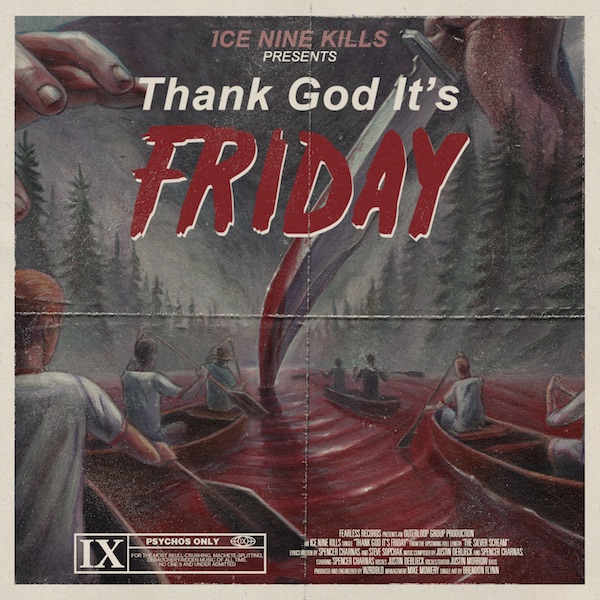 The band has just issued the new video for ‘Thank God It’s Friday’. In the clip, the group (and a bunch of unsuspecting teenagers) visit Crystal Lake and that’s when all the trouble ensues. The video is a modern tribute to the classic Friday the 13th slasher series starring machete-wielding horror hero Jason Voorhees.

The song will appear on Ice Nine Kill’s upcoming album “The Silver Scream”, out Friday 05 October via Fearless Records. All of the album’s 13 anthems are based on 13 respective horror classics. The physical pre-order is available here.

The band previously shared the cinematic video for “The American Nightmare” — a twisted and tasteful homage to director Wes Craven’s A Nightmare on Elm Street franchise. The video provides a thematic feast for children of the ’80s who grew up loving Freddie Krueger, the first film, and its sequels. It was directed by Daniel Hourihan and is the first installment of an over-arching film that will be a counterpart to the The Silver Scream. Watch it here.

The band is spending its summer on the final traveling edition of the Vans Warped Tour and will appear on all dates, which run through August 5. All INK summer tour dates are below.

Through the art of intricate song writing and elaborate storytelling, the Boston band has mastered the ability to engage and captivate listeners. Seamlessly weaving aggressive post-hardcore with soaring melodies, the band utilizes multi-textured guitar hooks, a dual vocal attack, complex orchestral arrangements and a pummeling rhythm section, which grabs the listener by the throat and refuses to let go.

The group’s 2015 offering, Every Trick In the Book, paid homage to a classic literary work and became Ice Nine Kills’ biggest to date, bowing at #1 on the Billboard Heatseekers Chart and in the Top 5 of the Hard Rock Albums and Independent Albums charts. Ice Nine Kills lived on the road, touring with Motionless In White, Every Time I Die, Chelsea Grin, Wage War, and more.