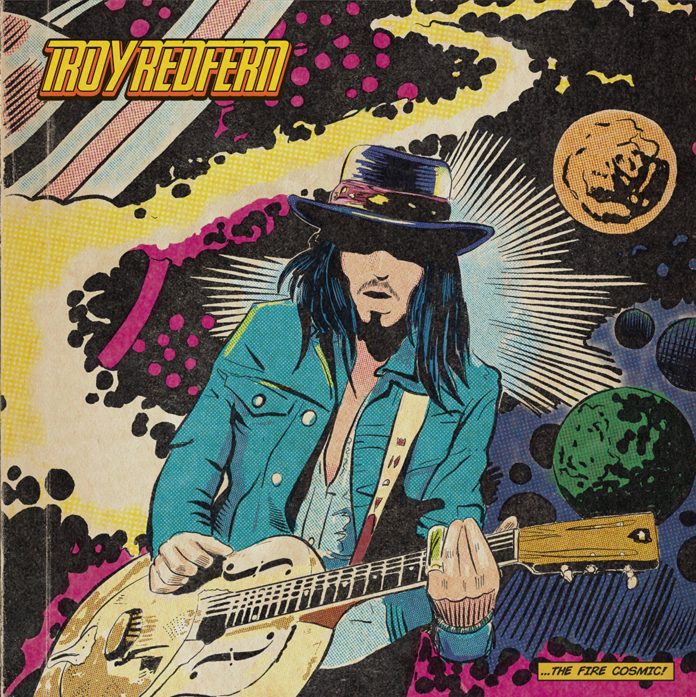 Hailed as the King of British slide guitar, Troy Redfern, has today released a free download of a new song Ghosts taken from his upcoming album The Fire Cosmic released August 6th.

Ghosts is available as a free MP3 download at www.troyredfern.com.

The Fire Cosmic album is available to pre-order HERE.

Against the backdrop of Darby Todd’s ‘train beat’ drum shuffle, Ghosts gradually builds with subtly-layered acoustic textures, as it builds it’s way towards a massive chorus.

The new album follows five unprecedented albums Troy released in 2020. It was recorded at the legendary Rockﬁeld Studios in North Wales, the same studio where Queen recorded all their early albums including Sheer Heart Attack (1974) followed by A Night At The Opera (1975).

For the new album, Troy enlisted one of the best rhythm sections in the UK, including the legendary Darby Todd on drums (The Darkness, Martin Barre, Paul Gilbert), and virtuoso bass guitarist Dave Marks (Hans Zimmer).

Troy describes the contributors on the album as “the ultimate dream team” on what is arguably the British guitarist’s most distinctive and powerful release to date.

“I chose Rockﬁeld Studios because so much of the music I grew up listening to was recorded at this legendary studio (Queen, Black Sabbath),” says Troy. “The studio has a timeless reputation for all the iconic, classic albums that have been produced there.”

“It was important for me to capture the raw energy of three guys playing live in the same place, at the same time. That’s something that you just can’t get if you’re sending ﬁles from diﬀerent locations, it doesn’t have the same vibe or feel if you do it that way.”

As soon as we arrived at Rockﬁeld, everyone, including Darby and Dave who’ve recorded all over the world, were excited to be there,” continues Troy. “It’s that kind of place. It has that eﬀect on every musician who records there. Even before we started recording, the energy and vibe was there, which deﬁnitely set the tone for the entire album.”

Troy cut his teeth and reﬁned his style over the last few years, playing festival main stages and blazing a trail across Europe, Scandinavia, and Russia. He’s also become a well-known draw on the UK Blues Rock festival circuit, playing alongside rock luminaries including Robert Plant.

The forthcoming studio album is a culmination everything Troy has learnt so far on his musical journey, and, more importantly, brings into sharp focus a much tighter song-writing and more visceral, muscular production style.

For production duties, Troy enlisted the Brighton- based producer Paul ‘Win’ Winstanley, best known for his epic rock production style, and whom Troy met and had worked with previously on the 2019 RHR album, Hotel Toledo. Troy and Win bonded immediately, and shared the same musical aesthetic, no nonsense work ethic and dry sense of humour.

Rockﬁeld’s vintage mics, mixing desk, and analogue outboard gear gave Win options to capture the dynamic performances on the album. “It was like being a kid in a candy store,” says Win.

“It was important for the album to sound massive,” says Troy. “It was a much bigger sound than anything that I’ve released before. As soon as we heard the ﬁrst takes in the control, we were blown away. We knew that we captured something special. It sounded fantastic.”

“For the session, Darby Todd brought his vintage Ludwig Vistalite acrylic drums of John Bonham fame. The drums are renowned for sounding massive. Hearing them in one of the best drum rooms in the world, they sounded out of this world! Roger Taylor’s drums recorded for Queen’s Sheer Heart Attack album at Rockﬁeld are some of my favourite drum sounds ever.”

Ron ‘Bumblefoot’ Thal states, “It all starts with the drums, if you’ve got a great drummer, great sounding room, great board, it’s going to sound phenomenal, and it does!”

“I met Ron at a festival in Poland that we were both playing at, we immediately hit it oﬀ,” recalls Troy. “He let me use his signature double neck guitar to play on Anthony Gomes encore set at the festival, that was an absolute blast. He’s such a cool, generous guy. When I returned to the UK, I emailed him to ask if he’d like to play on my new album. He was totally ﬁred up to do it.”

Troy continues, “The album really is a step up. It’s the best album I’ve made. Hiring Rockﬁeld, getting the best players, the best producer – it was a risk, but it paid oﬀ tenfold. I’ve made an album I really couldn’t be happier with.”

“With all the hard work that went into getting this album to sound as great as possible, there was only one option when it came to mastering. I decided to hire Frank Arkwright (Biﬀy Clyro, Oasis, Iggy Pop, Paul Weller, System of a Down). Frank is the senior mastering engineer at Abbey Road Studios. The mastering at Abbey Road added that ﬁnal sheen. Frank did an absolutely amazing job in bringing out every nuance of the recording.”

“When it came to the album artwork, I was originally going to get an artist from Brazil to do it for me, however, I started working on some artwork of my own in the silver age Marvel comics style, based on the four guys that were on the album. I posted a few visuals on the socials and was overwhelmed by the response.

It was a huge kick getting responses from Joe Satriani, Richie Kotzen and my slide guitar hero Denny Walley of Frank Zappa fame. As a result, I created my own comic-style illustrations to package the album.”

TROY REDFERN
ON TOUR WITH ‘ROBERT JON & THE WRECK’

ON TOUR WITH ‘WILLE & THE BANDITS’