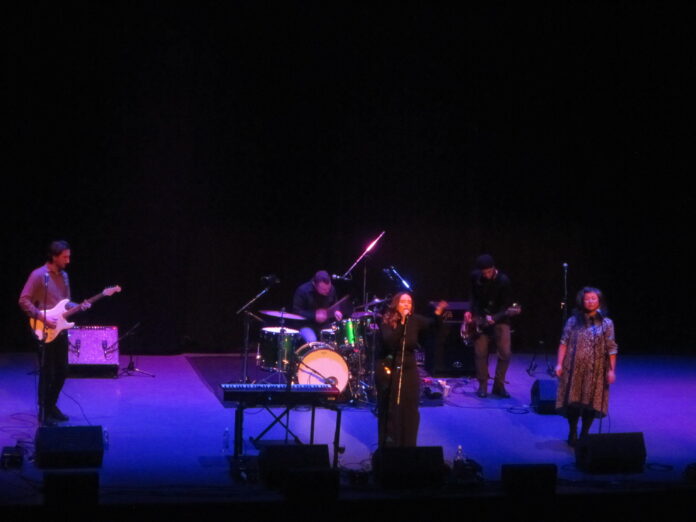 At times we forget that the artists and musicians we go to see have lives just like us and similar worries. This becomes clear tonight as singer-songwriter Frazey Ford shares that she`s left her eighteen year old man child son home alone in Canada for the first time, with just her dog to look after him while she tours the UK for a couple of weeks. She`s finally caught up with him after a couple of days worrying via WhatsApp video, it`s midday and he`s still in bed!! This is the sort of easy going charm that is prevalent here tonight in this rearranged show where this six hundred seated venue begins to feel like you`ve been invited into Frazey`s living room.

I first got to see this musician back in 2002 at a musician centred pub in Birmingham called The Ceol Castle as part of folk, country, and bluegrass trio The Be Good Tanyas. I think I saw the band once maybe twice more before they seemed to not split up but sort of dissipate into the ether. I sort of lost track of Frazey until her most recent third solo album `U Kin B The Sun` and was looking forward to reacquainting myself with her and her music at tonight`s performance.

There`s no fuss as Frazey and her band arrive on stage and share a delightfully intimate ninety minute show which encompasses some old and new songs of pain, joy, love and strength and some stories relevant to them or at times not.

The dreamy `Lay Down With You` and `Bird Of Paradise` are part of the opening numbers before the singer sits at the piano to share the wonderfully upbeat `Money Can’t Buy` with some charming backing vocals from Caroline Ballhorn. We get to hear that she doesn`t enjoy live streams and reveals that her six foot son Saul is a drummer and that`s probably due to her standing in front of the drummer when she toured the UK when seven months pregnant with him.

The hypnotically delicate “U and Me` spellbinds us before that is broken with what the artist calls her bitch anthem `Done`. `Three Golden Trees` comes after Frazey discusses the subtle differences in how the English language can be misinterpreted and sites an example of the question `You OK?` or `You Alright?` which this side of the pond is a simple how are you but North Americans take it as a much deeper philosophical question as to their physical and spiritual wellbeing.

The singers parents were hippies and when she was born, they asked her brothers to choose her middle name; they decided to name her after their pet cat Obadiah that had recently run away. Thank god their cat wasn`t called `Bubbles as one of my childhood cat`s was. This was part of the introduction to the song `Azad` which was dedicated to her sister, a wild wolf child after whom it`s named. A tough circus carney nowadays.

The show closes out with `The Kids Are Having None of It`, `September Fields` and ` Holdin’ It Down` as the band take their bows and exit. I doesn`t take long for them to reappear and share what I think was `Weather Pattern`, the stunning `Firecracker ` before leaving us with the tile track of the latest release `U Kin B The Sun`.

This was a truly inspiring evening which to me was the kind of event that you look back on in the cold light of day and reflect back on what you almost missed first time around. It was a captivating ninety minutes and brought a brief ray of warm sunshine into a quite cold and dark winter evening. Frazey and her band are band are gracing a number of venues up and down the country until the end of this month. Make the effort to attend as you will be richly rewarded.