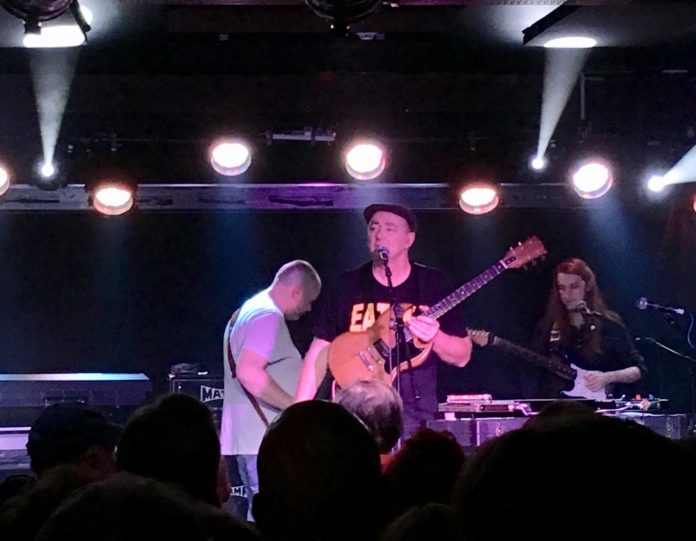 It’s Friday night and Frankie is back in town!!!!

The sensational Francis Dunnery Band return to Wolverhampton almost a year to the day since the last show and its fair to say that excitement amongst his fans had built steadily over the last few months…..there was a tremendous buzz around the bar pre show.

This is Francis’s third visit to the Slade Rooms in just over three years and each visit has seen the crowd increase in size…..so much so that the show tonight ended up a sell out.

This tour was billed as the ‘Eat Me In St. Louis’ tour, which to all us hard core It Bites fans was the last time we saw the original line up, to see some of these songs again was very exciting I must say…..and my word they didn’t disappoint.

Francis and the band opened proceedings with the blistering triple header of ‘Eat Me In St. Louis’ tracks ‘Positively Animal’, ‘Underneath Your Pillow’ & ‘Till The End Of Time’…..my god, what a start!!!!

A Francis Dunnery gig these days is an evening to behold……not only do you get a collection of some utterly magnificent songs played by some of the finest musicians around, you also get a guy in a gorilla suit serving drinks to backing singers plucked out of the crowd, dancing girls, bingo, a Pantomime Horse and many tales told in Francis’s inimitable style……all this makes for some very special shows.

So many great tracks were performed throughout the set such as ‘Murder Of The Planet Earth’, ‘Sister Sarah’, ‘Bullet In The Barrel’ & ‘Leaving Without You’ it’s tough to pick a favourite, but that honour for me fell to the incredible version of ‘Plastic Dreamer’ from my number one album of all time ‘Once Around The World’…..the crowd belted out in unison ‘More, More, More’ and it really was one of those goosebumps moments where you just had to be there.

The encore of ‘Frankenstein Monster’, ‘Charlie’ & sing along favourite ‘Still Too Young To Remember’ (how was this not a hit single?) brought an utterly superb gig to a close……the collective smiles from the stage and from the crowd showed that this had been a wonderful evening for all involved.

Must give a special mention to band members Donavan Hepburn, Peter Jones, Paul Brown & Luke Machin for providing us lucky punters fortunate enough to be there with a night we certainly won’t forget in a hurry…….can’t wait until the next Francis Dunnery/It Bites instalment in January 2019, and I know at least another 500 people who feel exactly the same.