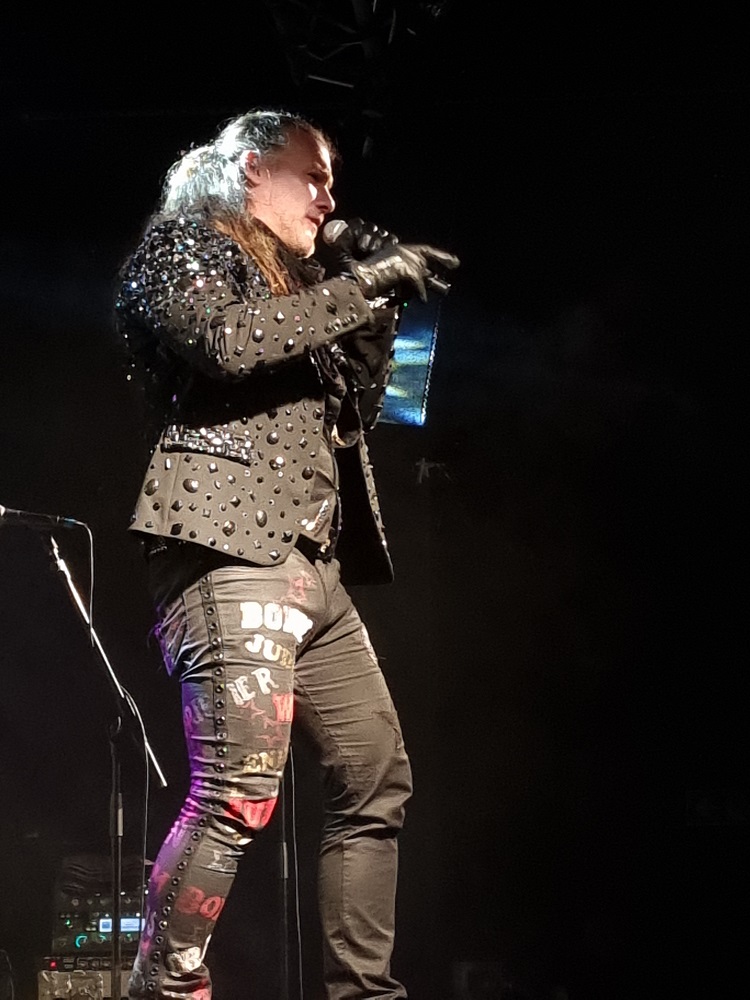 I dread to think how long it is since I first saw The Treatment, that night in Nuneaton when they played a free gig for Classic Rock magazine, but they’ve always known what they wanted to be. From the second they walk out tonight, after “Highway To Hell” has been greeted like an old friend, they are the living, breathing embodiment of rock n roll. New bassist Andy Milburn has braved Storm Barra by going topless, and as “The Doctor” ushers in the start of the set, Tom Rampton (in a scarf, far more sensible) lives out his dreams as a frontman from the days of old. And there’s a sense that this is a band making up for lost time. They’ve not been able to tour their most recent “Waiting For Good Luck” record (maybe they deserve some?) and they are bursting to play and that’s all there’s all there is to it. Tagore Grey is in the crowd before “Let It Begin” is done and “Let’s Get Dirty” isn’t even arsed with double entendre’s. There’s no time for foreplay. That thing about always knowing what they wanted to be holds true when you watch them too. “Shake The Mountain” from the early days (and a different line up) fits together with new stuff like “Rat Race” simply because it’s good, honest and classy rock music. Even the way they exit the stage: selfie with crowd behind means things are entirely as they should be. They are The Treatment and they’ve got a dose of rock. That’s the tag line they always should have had.

Towards the end of the set here, Fozzy play “Enemy” and Rich Ward gets his moment in the spotlight. He’s a fabulous guitarist, and he rips a brilliant solo out. Chris Jericho walks back onto the stage and points at the lead man and says: “holy shit!” 800 Brummies chant: “holy shit, holy shit!” in unison.

If that’s not an indication of what is obvious, then I’ll spell it out for you. There’s a very real possibility that if Chris Jericho decided to lead an uprising right here, right now, Birmingham would follow him into the breach.

Rewind an hour or so, and Journey’s “Don’t Stop Believin’” is blasting out over the PA, and it is no exaggeration to say that it goes down better than a lot of bands do.

It’s in that atmosphere that Fozzy step into, and credit to them, they begin with a song that isn’t on one of their albums – yet. It’s a measure of their bottle, I guess that “Sane” is from an album that’s not out till next year. It’s one of a few they do from that record, “Purifier” in particular is mighty and a real highlight when its played later in the proceedings.

That all being said, though, they know how to do a set. “Drinkin’ With Jesus” thunders, and if you can characterise their 75 minutes then you could say that they all have the ability to make a crowd get their fists in the air. All of them.

“Do You Want To Start A War” sees Jericho get a dry ice gun and shoot the crowd. Why? Well who’s arguing with him to be honest, and there’s a couple of covers. “Relax” rocks up the Frankie Goes To Hollywood tune. Look around the crowd and, guess what? All these metal fans know all the words. “Do you wanna cum, Manchester?” enquires Jericho. Stopping the gig to end the song again, which means (you’ll never guess) the crowd scream “Birmingham, Birmingham!” While the ringmaster, the star, the man looks out over his congregation, which is what they are at this point.

They end with “Sandpaper” but even if there wasn’t going to be an encore, the impromptu singing of “Judas” in full probably nails it. So they do that one, and they follow it with “Dirty Deeds, Done Dirt Cheap”, which rather underlines the fact these are just fans.

Fans is the word too, given the history of the cast here, but they are fans with a clutch of top metal songs, but more than that, Fozzy are a band that needs to be seen. They belong on stage, not least because they have a singer who has made a career out of being a showman. Maybe, though, he’s never happier than he is right here, in the middle of the chaos he presides over.