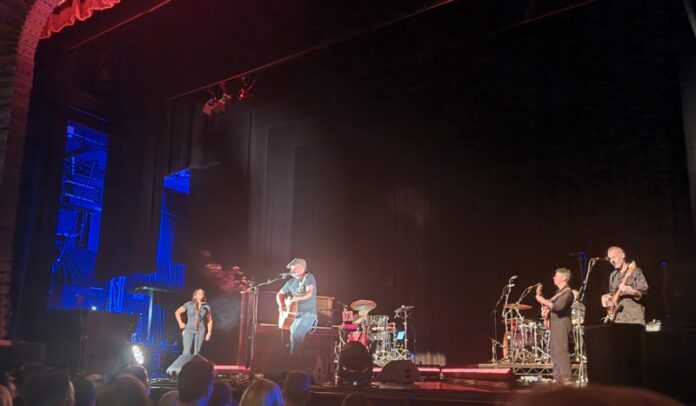 The Late Heavy stuck out an album last week, The drummer on “Vista” is tonight’s headliner (who sports one of their t-shirts in his set), but that’s about all I can tell you about the Irish band. Men of mystery, their commitment to not having any presence on social media is to be applauded, as is their sound. Their harmonies are sweet and gentle, they are essentially share their opening set with Gareth Dunlop (who they are the backing band for – as they are for Foy Vance) but even allowing for the brevity, you cannot deny that there is a beauty to songs like “From A Rooftop On Patrick Street” and “Under The Sun”.

The skill to the playing of Late Heavy is underlined by the way they switch gear for Dunlop. He emerges in his matching jump suit (the reasons for these are never fully explained beyond we learn they are “tight in the wrong places”) with his acoustic for a fragile “My Kind Of Paradise”. He is soon at the piano, though and his playing is so tender on “Old Friends”, while the song has so much depth. “Sorrow” and “Humans” are almost the engine room, if you will, of his just released “Animal” record, and they perform that role here too. His delivery is almost confessional, as if he’s sharing something of great importance with you. That is perhaps best reflected in his closing tune “Look Back Smiling”. A song he wrote for his son, but which serves as a reminder to us all to savour fleeting moments of joy.

“I know I normally talk a lot at my shows,” offers Foy Vance before he plays “Hair Of The Dog”. “But I’ve signed a contract that says I can’t drink until a certain time. So let’s just get through this, shall we?”

The Northern Irishman might be on the wagon tonight but sober, drunk or anywhere in between on the scale and you can’t escape the fact that you are watching an artist of rare brilliance here.

Beginning with a track from his 2007 debut, “Treading Water” with just him and a guitar is clever. It’s what conventional singer/songwriters do. Foy Vance is not that. Not at all.

In his next track “Hope, Peace And Love”, he’s got samples and guitar loops going before he disappears to play drums. This is not a one man band though. The Late Heavy are here again, there’s a keyboard player and tech whizz, and there’s Bonnie Bishop, who’s harmony vocals are just superb.

Last year Vance released a mighty record. “Signs Of Life” clearly has his confidence too, so much of it is played. “Roman Attack”, a tender “System” – written for his daughter who joins him on stage for it, and “We Can’t Be Tamed” all illuminate its quality, but its current single “Sapling” that provides a highlight. “Did you all think Rag And Bone Man was going to come out?” jokes Vance about the new version which features the giant soul singer, “we couldn’t fit him on the bus…..”

Elsewhere “Time Stood Still” provides a fine summation, with its primal drums and piano, and there’s a proper singalong moment with “She Burns” almost seeming to provide the centre point of the show.

And it is a show. It’s a performance. There are some brilliant songs here. “Cradled In Arms” (“I wrote this as a Christmas present for my mother, what have you done for yours?”) and he interweaves songs from the support acts in too. “War” from Late Heavy, and “Animal” – the title track of Dunlop’s record – are played as if his own. And in a way, given his influence, they sort of are.

“Casanova” adds a real raucous feel. It seems more at home on stage than it does on record, and “It Ain’t Over” carries on its singalong while Vance finally gets a beer.

The “encore that you didn’t ask for” as he puts it, takes in the same breadth of material as the rest. “Doesn’t Take A Whole Day” and “Indiscriminate Act Of Kindness” are both from the “Hope” debut and do seem to offer just that. Drummer Peter J McCauley gets a turn in the spotlight (as everyone seemed to) with his “Until The Lights Dim” before “Shed A Little Light” gives two things: an almost gospel feel and some wonderful soul vocal from Bishop.

By contrast, the last one, “Guiding Light” feels almost stripped down and with the band leaving part way through, it finishes as it started, with just Foy Vance, his voice, and his songs.

For a second, it almost felt like a normal, run of the mill gig. It was not. In his set, Gareth Dunlop had called Foy Vance “the reason I picked up a guitar”. You’d imagine he’d had that effect on many over the last 15 years or so. It’s best not to try and copy him though. You probably can’t. Not everyone has talent like this.