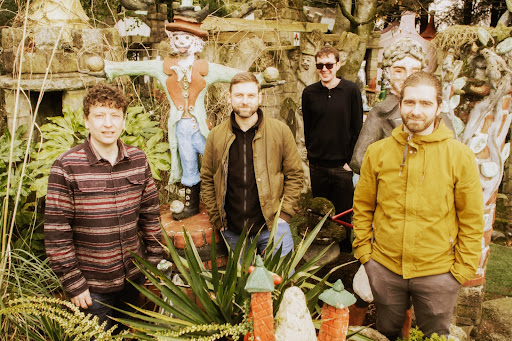 An eerie, psychedelic shuffle that brings to mind the freakier sides of Love and The Coral, ‘Forest Floor’ features a bass-led groove that descends into chaos with an extended outro made up of ghostly, wordless vocals, haunting harmonica and tumbling piano, all blown about by a storm of reverb-heavy guitars and relentless motorik drums.
Speaking of the track, lead singer Matty Loughlin-Day explains:

“The song sings of an impending storm, prophesised by an old sage and queries whether there is hope left in the town or whether it’s best to return to the land and find safety. Ultimately, the hero of the song is trying to find his best to way to survive on the line between the smug and the damned”

Accompanying the single is a surreal official video, filmed in The Rectory Nurseries on the outskirts of Wigan that boasts a walk-in collection of sculptures, antiques and outsider art, filmed by Matty Owen. Watch the video here.

The single precedes the release of debut album ‘Spring Tide‘ (out 6 May 2022, via Mai 68 Records); the culmination of a journey that The Shipbuilders have been on for five years. A melting pot of urgent Spaghetti Western soundtracks, jazz inflected odes to drinking absinthe, disco-tinged surf freakouts and much more, The Shipbuilders’ world is one that begs to be explored.
The ten tracks recorded with Danny Whitewood (BC Camplight, Ladytron) are the product of the inner workings of the mind of Matty Loughlin-Day, a Clinical Psychologist by day, and the wonders of Danny Lee (guitar), Jack McAllister (bass) and Graeme Sullivan (drums).
‘Spring Tide’ is released on 6 May via Mai 68 Records and sits snugly in any record collection that also has Sea Power, The Coral and The Pogues in it.