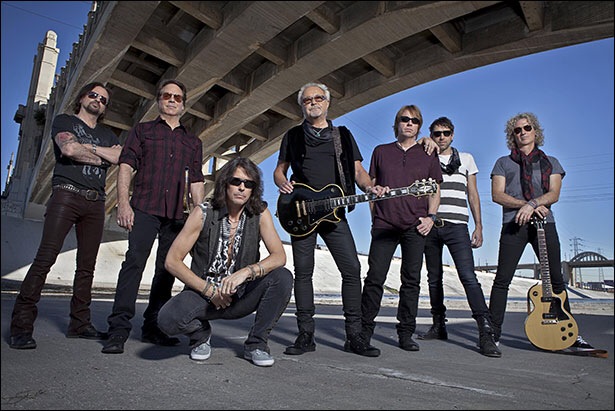 AOR serial chart botherers stick out a live collection next month. Do they know what love is yet?

Foreigner are set to release a new high-definition live recording from their most successful album of all time, Foreigner ‘4’. Universally hailed as one of the most popular rock acts in the world with a formidable arsenal of hit songs, Foreigner continue to propel sold-out tours and album chart action around the world. Now, Frontiers Music Srl presents a homage to Foreigner’s most successful album ever with “The Best of Foreigner 4 & More”. The live album will be released on 5th December 2014.

Foreigner ‘4’ spent more weeks at #1 on the Billboard charts than any artist in the history of Atlantic Records, including AC/DC, The Rolling Stones and Led Zeppelin, and went on to sell more than 9 million albums worldwide. Fans will see why it “Feels Like The First Time” when Foreigner debuts these new recordings of the best of Foreigner ‘4’ along with several other chart hits. Foreigner recorded these live high-definition versions of their most enduring anthems at the Borgata Hotel’s Music Box theatre in Atlantic City on October 3rd and 4th, 2014. The album includes some of rock’s best-known hits including Feels Like The First Time, Cold As Ice, Hot Blooded and Foreigner’s iconic ballad, I Want To Know What Love Is.

“Our music has touched a lot of people worldwide” says Foreigner founder, lead guitarist, Mick Jones. Also serving as executive producer of the new album, this Songwriters Hall Of Fame member wrote or co-wrote every Foreigner song and continues to lead his band to new heights. Mick continues: “Unwittingly, we’ve weaved our music into the fabric of people’s lives.”

If you feel so inclined you can Pledge for the album, and receive all manner of goodies. Click here to pledge.