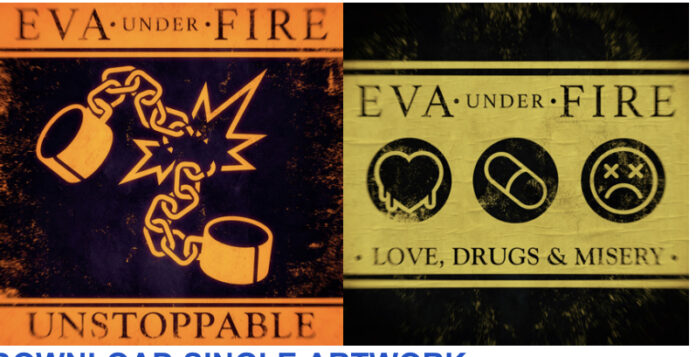 Fresh of the release of their new single “Unstoppable” last month, alongside the announcement of their first album being signed to Better Noise Music coming March 4, 2022, female-led Detroit band Eva Under Fire, just premiered the official visual for the new track. Directed by Tom Flynn & Mike Watts, the visual brings the song’s Bonnie and Clyde references to life with a comedic twist, as lead singer Eva Marie foils a police chase using a water gun. Watch the official music video HERE. “Unstoppable” is available across streaming platforms, along with a new lyric video, HERE.

The band is currently on the road, opening up for Theory Of A Deadman this winter.  For more information and to purchase tickets, visit: https://www.evaunderfire.com/. See below for a full list of dates.

ABOUT EVA UNDER FIRE

If you think rock n’ roll fairy tales are a thing of the past, you haven’t met Eva Under Fire. These Detroit rock upstarts got their start five years ago and instantly began cutting their teeth in the underground rock scene, building an enthusiastic fan base the old-fashioned way. However the band’s trajectory shifted toward the stratosphere when they sent an unsolicited demo to Better Noise Music, who recognized the band’s hybrid of rock, metal, pop and classic rock as something wholly unique.

That said, it took a lot of hard work for them to get to this point. The group’s roots go back to 2015 when Eva, guitarists Chris Slapnik and Rob Lyberg, bassist Ed Joseph and drummer Corey Newsom, decided to get together and write music that represented their diverse set of influences. The chemistry clicked and after releasing a well received full-length and two EPs, the band signed to Better Noise and spent the past two years working on their next album, their most ambitious and fully realized release to date.

CONNECT WITH EVA UNDER FIRE