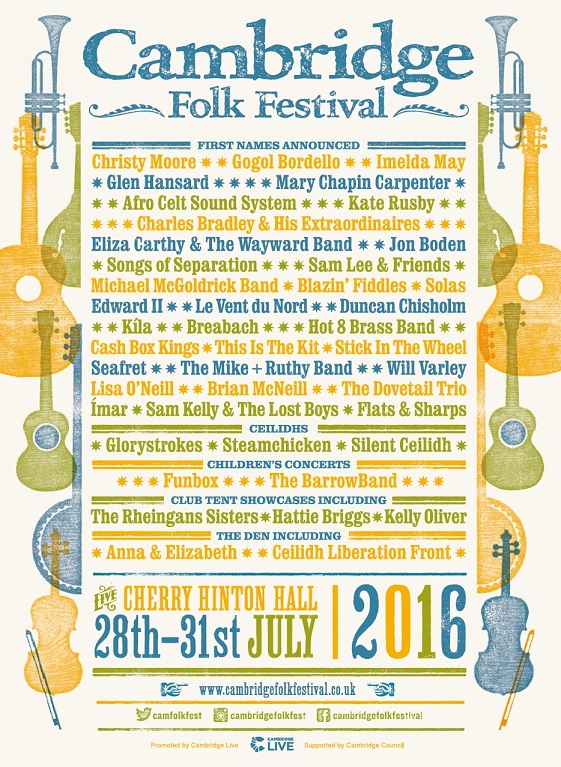 Not a ticket to be had anywhere

Cambridge Live, organisers of the Cambridge Folk Festival, have confirmed that the 2016 event has now completely sold out, continuing a 23 year tradition.

Now in its 52nd year, the Cambridge Folk Festival remains one of the most enduring and popular folk festivals in the world, bringing an eclectic mix of outstanding artists from around the world to Cambridge. Each year over 14,000 people attend the Festival at its beautiful location in the grounds of Cherry Hinton Hall. Tickets for the event went on sale in December 2015 with the first names announced in February 2016.

Cambridge Live has advised customers without a ticket not to travel to the event as no tickets will be available for purchase at the gate over the Festival weekend.  However non ticket holders still wishing to get a flavour of the event can listen to BBC Radio 2, who will be broadcasting a Festival round up on The Folk Show with Mark Radcliffe between 7–8pm on Wednesday 3 August. In addition, Mark Radcliffe and Julie Fowlis will be presenting highlights for Sky Arts for future broadcast on the channel.

This year sees the Festival underline some of its core values. It has always championed musicians, be they world renowned headliners or up and coming young artists, and the new Sessions Café provides another space for acoustic sessions within an Indian-styled tent offering great food and drinks, free Wi-Fi and late night opening.

Cambridge is collaborating with Sligo Live, Ireland’s premier folk, roots and indie music festival, in hosting ‘open sessions’, led by six of Ireland’s  finest, young traditional musicians, during the afternoons and after main stage performances. This focus on inclusion is enhanced by the many, varied workshops taking place over the weekend, from singing, songwriting and playing to arts and crafts. The new lower-priced Youth tickets are aimed at encouraging young people to participate.

The themes of social justice, fairness and tolerance which are always close to the Festival’s heart are explored in a programme peppered with artists renowned for their strong views. There are also special talks and performances including a talk from members of ‘Songs of Separation’ explaining the personal, political and social themes behind the project and ‘Conversation, Music and Social Conscience’, a songwriting workshop from O’Hooley & Tiddow exploring how their music approaches these themes.

Pushing forward with its environmental and ethical goals, the Festival is now an associate of A Greener Festival having been one of the few events awarded Outstanding for its environmental performance in the Greener Festival Awards in previous years. Plus the Festival is involved with Attitude is Everything, an organisation which improves Deaf and disabled people’s access to live music by working in partnership with audiences, artists and the music industry.
Neil Jones, Operations Director for Cambridge Live, said, “We’re pleased to announce that once again the Cambridge Folk Festival is a total sell out. In an ever competitive market place is fantastic to have such support from our loyal audiences who we look forward to welcoming to this year’s event”.