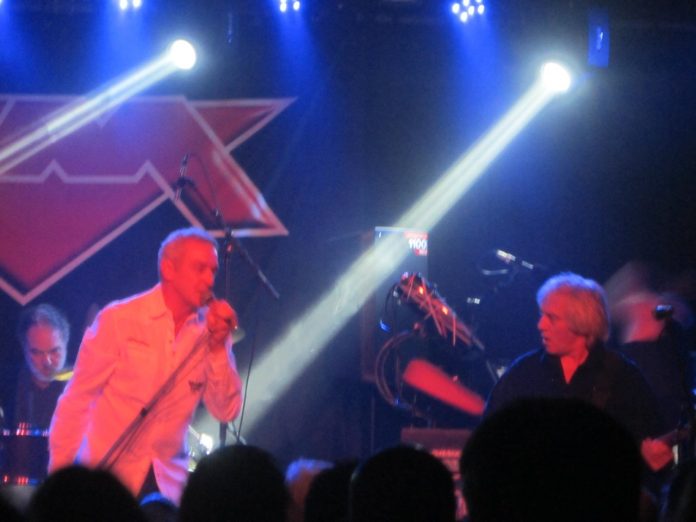 Steve and the boys shake off those studio blues

FM are more than just the great survivors of British Rock, they have long been one of its finest bands.  Since their reformation in 2007 (but more particularly since their wonderful guitarist Jim Kirkpatrick joined a year later) they have undergone a renaissance and perhaps are more appreciated now than at any point in their careers.

Playing here as one of a handful of gigs to warm up for their upcoming festival appearances, the shows are to get them out of the studio. Holed up recording a new album, which singer – apt as he isn’t called “the voice” for no reason – Steve Overland confirms on stage will be out next year, their natural habitat has always been the live arena.

Kicking off tonight with the swaggering “Digging Up The Dirt” from their last record, is a glimpse into the recent past, but as usual with FM it is about a mixture of the history and the present – and the good news is from whichever era it belongs it is about quality hard rock.

Hook filled stuff like “Let Love Be The Leader” or the more brooding “Burn My Heart Down” has, put simply, just a slice of quality all the way through it. There is a sense of fun too. A couple of times Overland jokes “here’s one we haven’t done for a while, mainly due to me threatening to leave the band if we did” and the version of the seldom played “Shot In The Dark” (the original arrangement with lyrics written by Overland and his brother) needs to be done twice: “it’s why we don’t do that….we can’t play it,” deadpans Steve.

A suggestion of “here’s one we have played that many times we can’t mess it up,” heralds not only “American Girls” but a breathless ride to the finish that includes “Bad Luck” – which MV has long maintained if it had been a Bon Jovi song in the 1980s would have sold so many that the writers would be driving around in gold cars by now – “That Girl” and “Other Side Of Midnight” and in so doing proves why FM are the best at what they do.

The encore too shows their skills. “Story Of My Life” is a vehicle for Overland’s incredible vocals (and he is ably backed up by Jem Davis’ superb keyboards) while Robert Hart, who had earlier been solo support, joins them for a run through of “Can’t Get Enough” and in so doing shows why he was actually in Bad Company for a while.

“Can’t Get Enough” though is a rather reasonable summation of the public and FM. They might have had 12 years away, but they are 10 years back and still no one is quite as tuned in as they are.