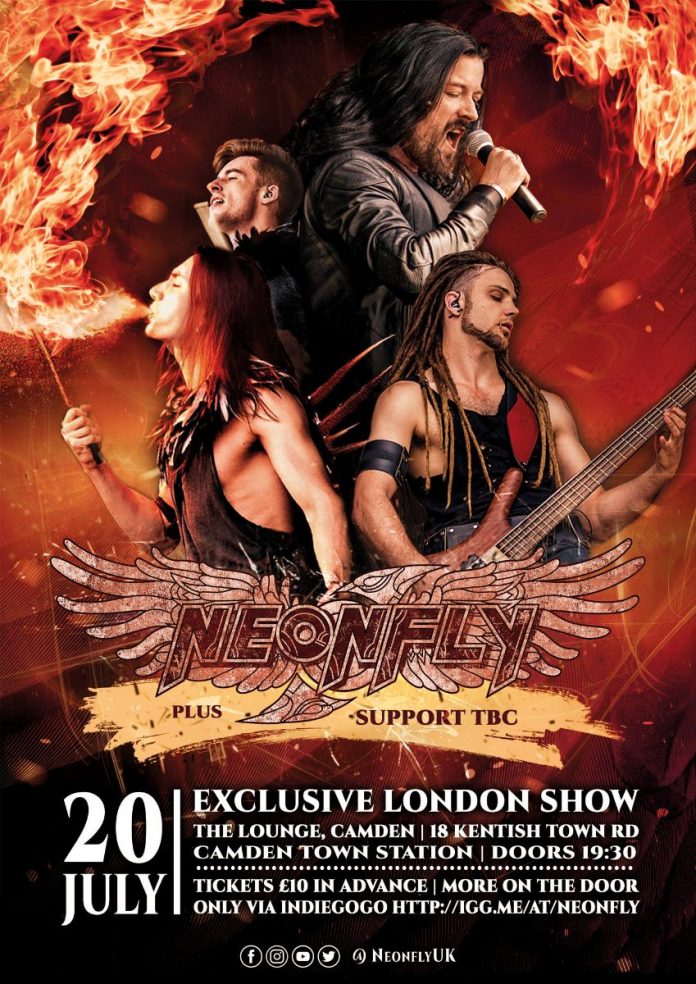 NEONFLY have already announced their return to the fray in serious style with the release of their incendiary new single and now they are delighted to confirm a rare UK gig at The Lounge in Camden on 20 July 2019 [special guests and support to be announced].. This live show comes just two days before the end of their crowdfunding campaign to finance their third album that will feature the single ‘This World is Burning’. ‘The Future, Tonight’, the song and album will be produced by Romesh Dodangoda, whose work with Motorhead, Bullet For My Valentine, Funeral For A Friend and most recently on Bring Me The Horizon’s #1 album ‘Amo’ speaks for itself and have made him one of the most exciting & in-demand producers in the world of heavy rock/metal. On ‘This World is Burning’ Romesh has brilliantly crafted the first steps of Neonfly’s journey into the new sonic territory that will characterise ‘The Future, Tonight’.

In the four years since their last release, Neonfly have consolidated their live reputation storming festival main stages, and touring as openers for some of rock’s biggest names: Alice Cooper, Dragonforce, Anvil, Gamma Ray and Magnum, to name but a few. They are going to level Camden on July 20!

Eagle-eyed fans will have noticed Neonfly have been performing live with the stunning new drumming talent of Dec Brown. The band have been working with Dec since 2016 and are now pleased to officially announce him as Neonfly’s new drummer. The band have also taken the decision to move forward as a 4-piece, with an extra touring guitarist, following the amicable departure of Andy Midgley in 2018.

With their new material, Neonfly have taken a more modern and contemporary approach, reflecting the band’s musical maturity and evolution. Neonfly guitarist & songwriter Frederick Thunder says, “I wanted this album to be an artistic statement that would define what Neonfly represents today. It was my intention to write something modern and contemporary that would present a definitive departure from our classic/traditional metal roots, creating a new sound that’s both musically exciting and artistically engaging. We want to release an album that stands out today, reflecting the times that we are living in, both musically and lyrically, with the aim to create and innovate”.

‘This World Is Burning’ and the forthcoming show at The Lounge marks a welcome return to the recording world from a band that never really went away. The songs blistering lyrics, co-written by Frederick and singer Willy Norton deal with the tumultuous current political and social climate. This new material marks a true development in sound and attitude and serves as a bridge between the first two albums, and what’s coming up on ‘The Future, Tonight’. There’s a real buzz around Neonfly.

Tickets are on sale for £10 exclusively via Indiegogo
Ticket + CD bundles & Ticket + t-shirt bundles are available.