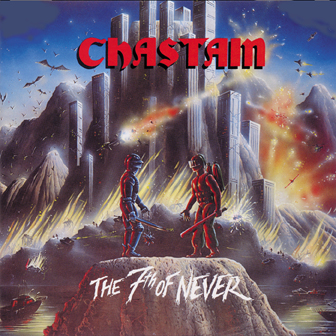 David T. Chastain has gained a reputation over the last 25 years as a powerful, progressive guitarist whose music has been centred around his melodic and technically fluent playing. Besides David’s virtuoso style, the other major attribute to CHASTAIN’s instantly distinct sound is vocalist Leather Leone’s commanding presence. Divebomb Records is excited to announce it has teamed up once again with CHASTAIN to reissue two more critically acclaimed albums – The 7th Of Never (1987) & The Voice Of The Cult (1988) from their catalogue.

Ever since his recording debut, David Chastain has been wowing fans with his innovative and technically superb guitar playing. The 7th Of Never and The Voice Of The Cult are perfect examples that David T. Chastain was not just a great player, but also a talented songwriter and band leader with an exceptional group of collaborators to help make his melodic visions a reality.

These limited edition releases are newly remastered from original albums mixes and contain brand new interviews with David T. Chastain and Leather Leone. Full lyrics and archival photos add to these all expansive and updated reissues.

For direct info go to:
www.LeviathanRecords.com

CHASTAIN has announced that they will be releasing a new album in 2015. The title of the new album will be “We Bleed Metal.” The group lineup will be the same as on the 2013/2014 albums “Surrender To No One” and “Surrender To No One: Uncut.”
Leather Leone – Vocals
David T. Chastain – Guitars
Mike Skimmerhorn – Bass
Stian Kristoffersen – Drums

Leather says: “Coming back at you… Running on a higher vibration… Metal rules us. New material, new excitement and another chance to bleed Metal in your face. The return of an old disease… We Bleed Metal!”

The band will finish the recording later this month in Atlanta, GA. To keep updated on the latest concerning “We Bleed Metal” go to: www.webleedmetal.com