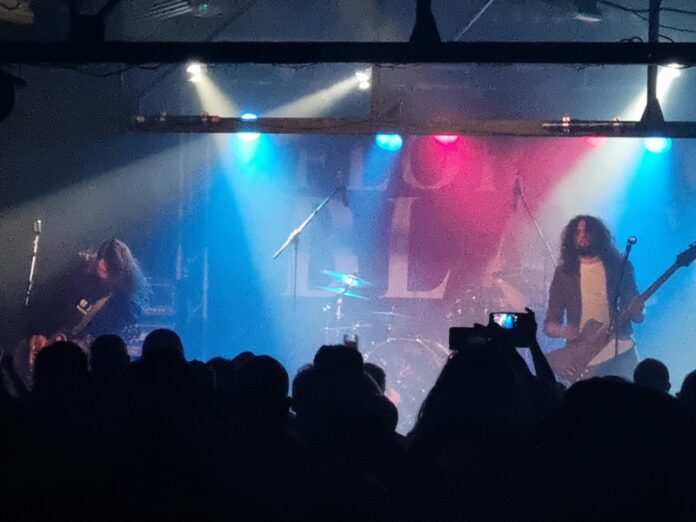 Life comes at you fast and we’re all getting old and all that, but it’s eight years since MV saw Fury live. So, you may already know, but to catch me up: they’re very different these days. Julian Jenkins is still there, but there’s a host of new additions. The most important of which (certainly to the dynamic of the tunes) is Nyah Ifill on vocals. Officially she’s backing Jenkins but that would be to do her a disservice. Her soulful, rock n roll presence gives Fury a new dynamic. They are still a thunderous metal band (bassist Becky Baldwin is about to begin a stint with Mercyful Fate for goodness sake!) but they are a metal band with their own twist. “Dragon’s Song” is fists up in the air, balanced acutely by “Rock Lives In My Soul” their anti-sexism anthem. Its “Road Warrior” though, that most convinces. The vocal interplay, the skill, is sublime. And last song “Casino Soleil” gives drummer Tom Fenn, (ex of MV faves Torous) the chance to shine. The whole band do, though and this is set that rather nearly underlines that old adage, the more things change, the more they stay the same.

Haxan released their “White Noise” album back in 2020 and there was a line that struck me then: “we declare, we’ve arrived.” They’d sung, as if it was totally evident and not debatable. Watching the three piece tonight they more than make good on that promise. There’s an urgency, a desire if you wil,l to win the crowd over, so much so that Sam Bolderson almost seems ready to grab anyone that isn’t on their side and find out why this should be. The quality of the songs on “…..Noise” was evident, and still it shines on the filthy bass groove that Harriet Wadeson gets on “Nine Lives”. Whether its “Grave Digger”, “Skeleton”, or “Black Sheep” doesn’t really matter, either. Take your pick, because wherever you turn there’s a slice of hard rock, delivered with a little menace, and exactly the way it should be. Confident enough (or perhaps a better way of putting it is that by the end they have enough friends in the crowd) to get a singalong going in “Killing Time”, so job done, you imagine. South Wales has always had brilliant rock music emanating from its soil and there’s another outfit here. Haxan had the album. Now you know they’ve got the attitude to make them special.

The first inkling of something special happening for Florence Black was when, about this time last year, I went to see Norwegian’s Bokassa. Florence Black were opening. When they finished, lets be blunt. The crowd went home in the main.

Fast forward to the autumn of 2022 and they’ve won Best New Band on Planet Rock, something of an irony given they had a spat with one of their DJ’s a few years ago because he wouldn’t play them (they probably hadn’t played Kiss that hour so couldn’t fit it in…..) and more importantly, this place is packed.

That all means that the moment they walk on stage to “Zulu” (the opening track on their quite brilliant album “Weight Of The World”) is something of a victory lap, a vindication for all the hard graft.

That might make them sound like grizzled veterans. They really aren’t. Tristan Thomas, Jordan Thomas and Perry Davies are all in their mid-20s and the fact they do hard rock in such an original way really is striking.

If we take a couple of songs in isolation from this set. Early on they play “Inside Out” and it seethes. There’s bits of Stone Sour in its mix. Towards the end they air the genuinely lovely “Grove Street”, as warm as a summer breeze, its breakdown is filled with the crowd joining with the hook. Not only have they basically made it at this point (Thomas, without actually speaking to the crowd except to thank them, has them eating out of his hand), they’ve done it with a breadth of material that is isn’t easy to pin down.

“Can You Feel It?” for example, is sensational. “The Deep End” even better, and “The Ride” is surely going to still be in their sets in a decade’s time.

Either a nod to their homeland, or a sign that they walk a slightly different path to most young bands (in honesty its probably both) sees them do Budgie’s “Breadfan” (better than the other band that did it too…..) before the end, but this being a headline tour and with Florence Black riding the waves, there’s an encore. And it’s interesting to watch the reaction to “Sun And Moon”. Treated like it’s a genuine anthem, it actually convinces yet further that this band is nowhere near at it’s peak.

There’s been something special brewing with Florence Black for a couple of years and it really does seem to be coming boiling point. There’s been myriad bands over the decades that have been saddled with the Next Big Thing tag and for whatever reason it hasn’t quite happened, but dammit, we’ll have a stab. The next big thing is right here. The sky (or the arena, perhaps?) is the limit.