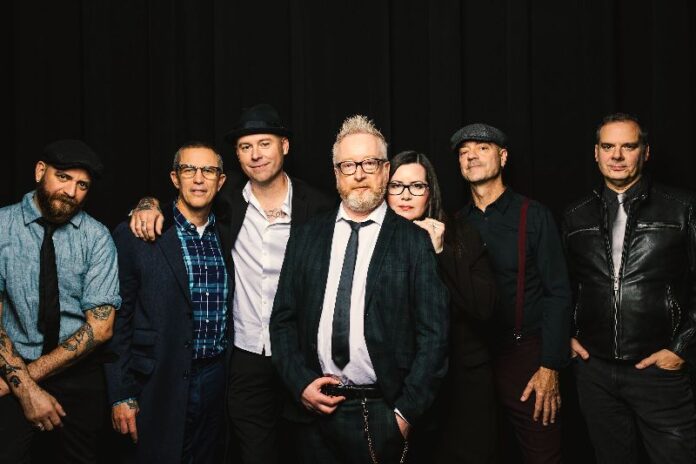 “With this record we went back to the basics in a way that I don’t think we could have done if we hadn’t been playing together for over 20 years,” says singer/guitar player Dave King. “I think going back to Chicago and doing this record with Steve made the experience so fun and I really believe you can hear that on the record. For Flogging Molly, getting together and playing new songs is always the goal—and now we’re just getting excited to start playing these songs live and giving our fans a whole new era of Flogging Molly.”

A second preview of the 11-song collection arrives today, with the release of “The Croppy Boy ’98,”  a track that King describes as “a foot stomping, rollicking ode to traditional Irish music.” The song’s arrival is accompanied by a live video (link) featuring footage from Flogging Molly’s recent St. Patrick’s Day performance and annual festival at the Hollywood Palladium. The band released the irreverent “These Times Have Got Me Drinking/Tripping Up The Stairs” (https://riserecords.lnk.to/TTHGMD) ahead of their March 2022 tour and sold-out Salty Dog Cruise.

These Times Have Got Me Drinking

A Song of Liberty

The Croppy Boy ’98 (hyperlink to smarturl)

This Road Of Mine

(Try) Keep The Man Down

Now Is The Time

These Are The Days

Album pre-orders, which include a galaxy green vinyl offering, are available now via https://riserecords.lnk.to/FMAnthem.

Flogging Molly and The Interrupters kick off their U.S. co-headlining trek tonight in Indianapolis, with the bands joined by openers Tiger Army and The Skints. Tickets are available via Floggingmolly.com.

The band will be touring Europe at the following dates: