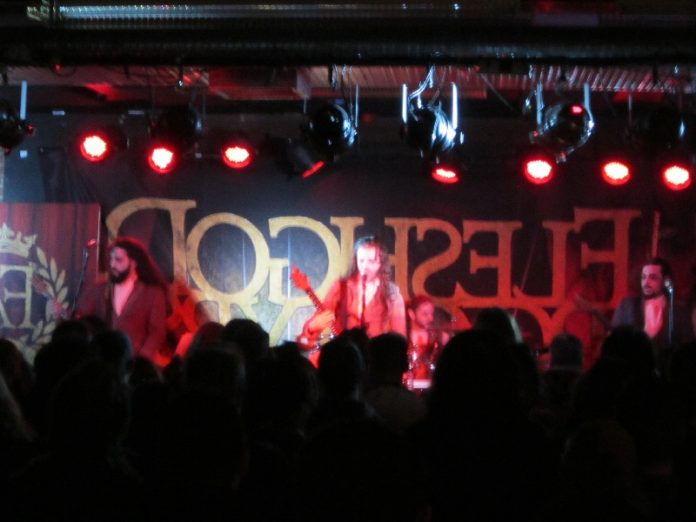 Damian gets to Wolves for a night of brutality, and survives the apocalypse

A night of extreme metal was in store and up for starters were Birmingham’s own Trivax. A short but quite intimidating set from this corpse painted troupe was shared with the only real interaction from the band with the audience being a one fingered salute and “Fuck off” from singer Shayan S at the close of the set.

Coventry’s  extreme metallers Gethika were up next and again these boys were in full make up. Once more we were party to a brutal, menacing passage which went down a storm with the appreciative masses.These boys certainly know how to win over a crowd. It was great to see two local bands given a chance to ply their wares but it was shame the sound couldn’t have been better.

Hailing from Basingstoke, Orchestral groove metallers Xerath arrived on stage to a spaghetti western aria. We then get about thirty minutes of top drawer full on metal. The wonderful “2053” and “Bleed this Body Clean” are stand out numbers amongst this shortened set. Pounding drums, grinding bass, scintillating guitars and guttural vocals are the trademark of this wonderful band. My only disappointment tonight was that it was so short but I suppose we do have four bands to get through.

Well on to the main course.  The boys are led on stage by Veronica Bordacchini, the bands female operatic vocalist carrying a Roman Legionnaire Standard or banner.

“March Royale” is the opener from this Italian Symphonic death metal quintet.

The crowd are almost apoplectic and the noise is almost like experiencing what an earthquake must feel like. We get new songs such as “In Aeternum” and “Fool” from the bands recently released concept album “King” and older songs.

At times the music was intricate, brutal, tortured but nevertheless quite breathtaking and beautiful.

This band is a wonderful neo-classical outfit and I’m sure they will be returning to much larger venues the next time they grace our shores.

It was an event, that very much like their music needs some reflection and I’m sure it’s one that I will mull over.

I can at least say I survived the Apocalypse