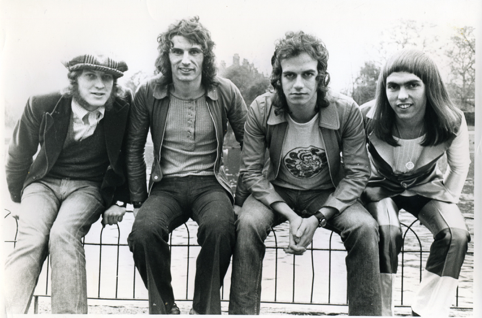 BMG is proud to continue presenting a new series of limited edition splatter vinyl reissues from Slade, with the release of ‘Slade In Flame’, on 26th November.

‘Slade In Flame’, the third release in the series, will be released on red and yellow splatter vinyl.

The first release in this beautifully presented re-issues collection ‘Slayed? debuted at #7 in the Official Vinyl Charts and the final release will be ‘Slade Alive!‘.Slade’s first soundtrack album and fifth studio album ‘Slade In Flame’, includes the singles ‘Far Far Away’ and ‘How does it Feel’. Originally released on 29th November 1974, the album entered the UK album chart at #6 and it was certified gold by the BPI in February 1975. Slade’s seminal film was hailed as ‘the Citizen Kane of British pop movies” by Mark Kermode, BBC.

‘Slade In Flame’ follows the release of Slade’s third and fourth studio albums ‘Slayed?‘, and ‘Old New Borrowed And Blue’. ‘Slayed?‘ features ten songs including Number One single, ‘Mama Weer All Crazee Now’  and ‘Gudbuy T’Jane‘ which reached Number two in the charts. While ‘Old New Borrowed And Blue’, features the singles ‘My Friend Stan‘ and ‘Everyday‘ and  The Times to retrospectively state: “This is joyous, unshackled and unpretentious stuff that reminds you how they rattled off six No.1’s.”

Slade are without doubt one of the most exciting bands to come out of Great Britain and were unstoppable throughout the Seventies becoming one of the biggest bands; releasing six smash hits albums, including three UK Number Ones, a run of 17 consecutive Top 20 singles and their hits provided a soundtrack to the Glam Generation.