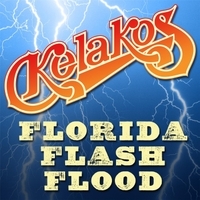 American classic rockers KELAKOS featuring. drummer / producer Carl Canedy of THE RODS / ST. JAMES, have released their brand new single “Florida Flash Flood”, the first new song by the band since 1978. Like a volcano, Kelakos has lain dormant for 38 years! In 2015, Kelakos released “Uncorked”, which featured 15 remixed songs from their heyday. Now Kelakos is back, stronger than ever with their latest single.

The song was produced and mixed at Studio B by Linc Bloomfield. Mastered at Cue Studios by Blaine Misner. Cover artwork courtesy of the incomparable Eric Philippe.

Fans have waited 38 years to hear more from Kelakos – now they are back with this powerful, relentless song guaranteed to get your blood pumping!

For the latest KELAKOS news and updates, visit the following sites:

Previous article
On The Hiss
Next article
If The Shoe Fits