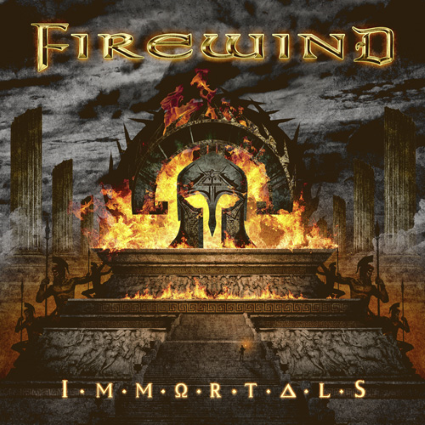 The best power metal band in the world?

It scarcely seems possible that it has been five years since Firewind’s last album, but it is. For the new one “Immortals”, it seems that Gus G and the boys were intent on making a statement.

Unequivocally, it appears they wanted you to know that they are the best at this type of thing on Planet Rock.

Quite simply, there is a class about the ten song here (plus bonus song) that put this leagues above most of the competitors in the upper echelons of metal.Right from the Dream Theater meets Hammerfall opening of “Hands Of Time” – all soaring chorus, double kick drums and riffery to die for – it is clear that “Immortals” is a little special.

“We Defy” is a thunderous thing, unleashing all hell and avoiding the rather more cheesy connotations that some of this music is sometimes guilty of. This is huge sounding of course – as it should be – but it is an in your face metal album too and all better for it.

Best of all, perhaps, is the quite brilliant “Ode To Leonidas” which not only sounds like Iron Maiden at their most proggy at the start, combines spoken word bits (and believe us, when it says “come and take it…..” at the end of the passage, it means it) and the best fists in the air chorus you can imagine.

The band seems completely revitalised here. Maybe because of the time in-between albums (main man Gus G has spoken in interviews about the slower pace of writing songs this time) maybe because of the new singer – long-time G cohort Henning Basse performs brilliantly throughout – but whatever it is doesn’t really matter as long as long as the end result is music as wonderful as “Live And Die By The Sword” is the end result.

“War Of Ages” kicks in with a mighty keyboard riff, before galloping along on a wall of guitars, while “Lady Of 1000 Sorrows” adds a bluesy element to its massive balladry as this record refuses to be tied down to one particular style.

The title track is another left turn. A two minute instrumental, “Immortals” has a kind of classical feel, as if it is an overture, while “Warriors And Saints” is a good, old-fashioned NWOBHM classic and has a brilliant, timeless feel.

“Rise From The Ashes” – technically the last cut here – is very much tying up all the loose ends, with the bonus song “Vision Of Tomorrow” which sounds like latter day Europe  much deserving of inclusion here to round off a collection that is full of thrills, spills and immense class.

Whether immortality awaits or not is hard to say, but “Immortals” is probably already the best album of its type that will be released this year.