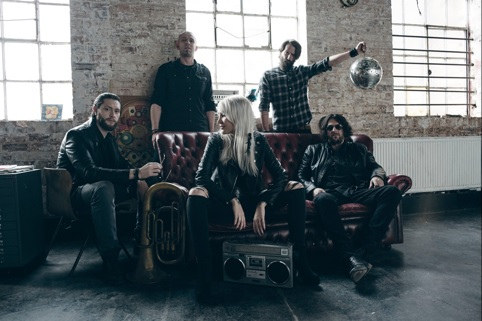 New single from ahead of live shows

The ferocious ‘Hail The Face’ with thickly amplified sheet metal riffs, jackhammer percussion, thundering drums, and soaring vocals, is a blistering monster of a tune. Lyrically “dealing with how people need to live behind a veil of lies and illusions to feel secure and safe rather than face the truth and take control of their destiny!”

Hailing from the Midlands, Fire Red Empress are an electrifying five-piece whose supercharged music is propelled by exhilarating, monster guitar riffs and powerful, haunting vocals. Feast your eyes on the video, a white knuckle ride featuring “James Bond” in a high speed duel.

The album is being mixed and mastered by Über Producer Jacob Hansen (Volbeat, Mercenary) at Hansen Studios in Ribe, Denmark and marks the first physical release with new singer Jen Diehl (formerly of Furykane). “We can’t wait for people to hear Jen on these new songs. She’s given us a different edge and her voice is unbelievable” says guitarist Paul Gethin. “It’s definitely a heavier direction but the hooks are still there”

The track ‘Black Morphine’ co-written by Brian Tatler also features a guitar solo from him. The band met Tatler after he read an interview with guitarist Carl Gethin in Classic Rock Magazine, and named Diamond Head’s Canterbury as one of his favourite albums. “Brian is a great guy, really down to earth and to write a song with someone you respect so much was an honour” says Carl.

Fire Red Empress to support the album’s release will be touring ‘like mad’  and promise ‘Whether you’re headbanging or your just nodding along to the groove, we guarantee you’ll have a sore neck the following morning.”

To pre order Hail The Face go to